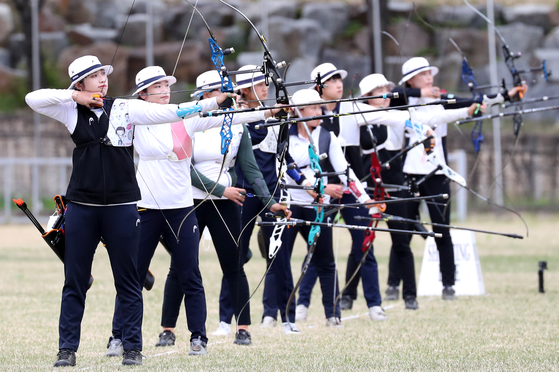 Archers aim their recurve bows at the national archery qualifiers at Wonju archery field in Wonju, Gangwon on Friday. [YONHAP]


The six members of the Korean national archery squad who will compete at the Tokyo Olympics were named on Friday at the national squad qualifications at Wonju archery field in Wonju, Gangwon.

Three berths for men and three for women are available for each country, with the eight highest-ranked teams at the 2019 World Archery Championships qualifying for the Olympics. The Korean men's team came in third and the women's team came in second at the world championships, giving Korea the maximum six spots at the Games.

The six athletes will be participating in five events, up from the usual four thanks to the addition of a mixed team event to the usual men’s and women’s individual and team competitions.

Kim Woo-jin, Oh Jin-hyek and Kim Je-deok will represent Team Korea for the men’s events and Kang Chae-young, Jang Min-hee and An San for the women’s events. 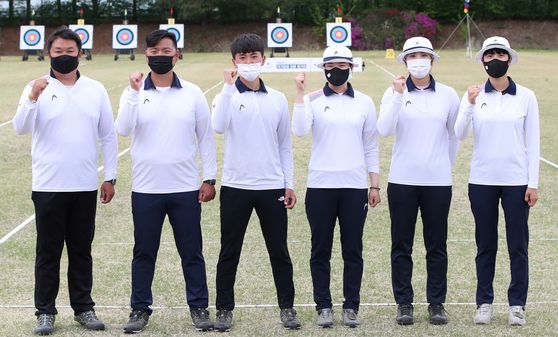 
Oh and Kim Woo-jin are the only two who have already competed at the Olympics before.

Thirty-nine-year-old veteran Oh won gold at the 2012 London Olympics. When the upcoming Tokyo Olympics were postponed due to the pandemic, Oh decided to delay his retirement to compete one last time.

Kim, currently ranked third in the world, also has experience shooting at the 2016 Rio Olympics, where he set an Olympic record of shooting 700 points in the qualifiers.

The four other archers will be making their Olympic debuts in Tokyo, having earned their berths through the notoriously competitive Korean national archery squad qualifications.

Seventeen-year-old Kim Je-deok beat Lee Seung-yun, the gold medalist in the men’s team event in Rio, with a slightly higher average score to earn his debut berth. If Kim wins in Tokyo, he will be the youngest Korean archer ever to win a medal.

Tokyo will be the first Olympics for all three female archers — Kang, Jang and An.

Kang is currently No. 1 in the world rankings, winning seven gold medals at 10 international competitions in 2019.

She failed to qualify for the 2016 Rio Olympics, finishing fourth by just one point. But Kang qualified first this time, with Jang in second and An in third.

When it comes to archery, Korea is untouchable. Korea has won a total of 39 Olympic archery medals, 23 of which are gold. The United States trails in second with just eight gold medals.

Korean archers have won every women’s archery event since joining the Olympics in at the 1988 Seoul Games.

At the 2016 Rio Olympics, Korea took gold in all four events. Team Korea is looking to sweep gold in all five events this time.

The newly selected national team will start training at the Jincheon National Training Center on May 3.