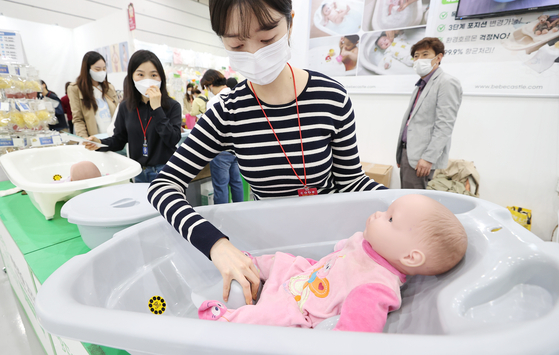 In February, the number of births hit a new low.

According to Statistics Korea on Wednesday, in February 21,461 births were recorded. This is a record low since current statistics were first compiled in 1981.

The number of newborns when compared the same month a year earlier declined 5.7 percent.

Despite government efforts to encourage couples to have more kids, the number of newborns has been shrinking for 68 consecutive months.

The number deaths in February totaled 23,774, which is a 6.5 percent decline year-on-year. It was the second consecutive month in which people that died has declined year-on-year.

The population decline is expected to continue as the number of marriages has been falling.

“Covid-19 seems to have led to a delay in marriages,” said Kim Soo-young, head of Statistics Korea's vital statistics division.

Covid-19 is also considered a key factor contributing to the decline in the number of divorces. In February, 7,759 couples divorced, which is a 5.7 percent decline year-on-year.

The rapid changing population has been raising concerns, especially at a time when the Korean government’s spending amid the pandemic has been aggressive and debt is rising at a rapid pace.

The social costs could affect the nation’s economy in the long-term.

The International Monetary Fund (IMF) raised concerns over the costs related to the changing demographics.

IMF Korea mission chief Andreas Bauer in an interview with Bloomberg earlier this month noted that while Korea is capable of handling the rising debt resulting from pandemic spending, it needs to be cautious about debt exploding due to the changing population especially with increases in the number of senior citizens.

The IMF projects that Korea’s debt to GDP, which was 53.2 percent this year will, could significantly increase to 69.7 percent by 2026.