Kospi sags as investors wait for Fed meeting in U.S.

Kospi sags as investors wait for Fed meeting in U.S. 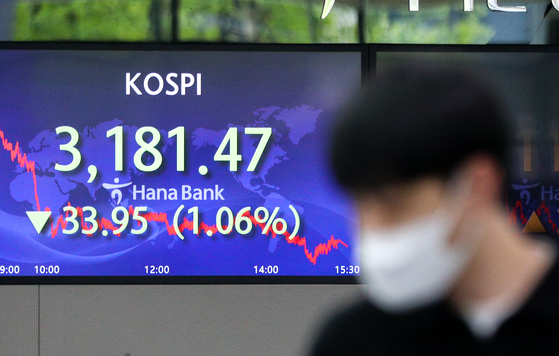 A screen in Hana Bank's trading room in central Seoul shows the Kospi closing at 3,181.47 points on Wednesday, down 33.95 points, or 1.06 percent from the previous trading day. [NEWS1]


Stocks dipped 1 percent on Wednesday as foreign investors offloaded local shares to cash in recent gains ahead of a U.S. Federal Open Market Committee (FOMC) meeting. The won fell against the dollar.

Trading volume was moderate at about 1.4 billion shares worth some 18 trillion won ($16.2 billion), with losers outnumbering gainers 699 to 193.

The Kospi got off to a weak start as investors took a wait-and-see approach, waiting for the results of the FOMC's meeting, which will come out later in the day.

"Foreigner investors seem to have sold local stocks over concerns that the Kospi’s steep gains this month could lead to high volatility in May, when the ban on short selling would be lifted," Bookook Securities analyst Lee Won said.

The local currency closed at 1,113.0 won against the dollar, up 2.6 won from the previous session's close.

Bond prices, which move inversely to yields, closed lower. The yield on three-year bonds added 0.7 basis points to 1.104 percent, and the return on the benchmark ten-year government bond added 4.5 basis points to 1.61 percent.