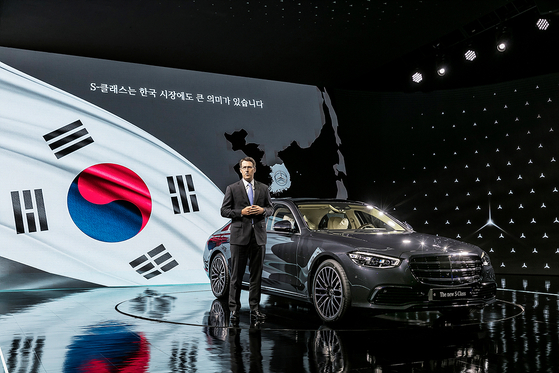 Thomas Klein, CEO and President of Mercedes-Benz Korea, speaks to the press at an S-Class Korean premiere event on Wednesday at the Dongdaemun Design Plaza in central Seoul. [MERCEDES-BENZ KOREA]


Mercedes-Benz Korea launched its top-of-the-line model, the S-Class, on Wednesday, which was fully revamped since its previous version in 2013. It had its global premiere last September.

The luxury sedan is being offered with a choice of four engines: two diesel and two petrol.

Aside from changes to its exterior, the high-end sedan has an updated lighting system, driving assistant system and safety features.

The S-Class is the first Mercedes model to come with front airbags for the rear seats, according to the carmaker.

The headlamps are equipped with what’s called “Digital Light,” where 2.6 million pixels and 84 LED modules enable a more acute distribution of lights. Using data from front cameras and sensors as well as from the navigation system, the vehicle controls the intensity and direction of the front headlamps depending on the driving situation.

Doing away with the wide digital display featured in Mercedes’ latest lineup, which combined the digital dashboard behind the steering wheel with the infotainment screen in the center, the S-Class offers two separate displays. The central infotainment screen has gotten longer, reminiscent of the iPad-like displays in Tesla models.

The advanced driving assistant system includes Active Brake Assist, which detects either pedestrians or incoming cars to activate the brakes, and Active Blind Spot Assist, which helps passengers get out of the vehicle by giving a warning signal when there are vehicles, bikes or pedestrians coming from blind spots.

Flush door handles pop out when the owner approaches.

“More than 130-years of craftsmanship and innovative technologies are the quintessence of the new S-Class,” said Thomas Klein, President and CEO of Mercedes-Benz Korea at the premiere event Wednesday.

“The new S-Class sets new standards for a luxury sedan with countless innovations, impeccable comfort and the highest degree of safety.”

Korea is the third biggest market for the S-Class, according to Klein, after China and the United States.

Mercedes-Benz Korea sold 6,324 units of the S-Class in 2020, 7 percent fewer than the previous year.