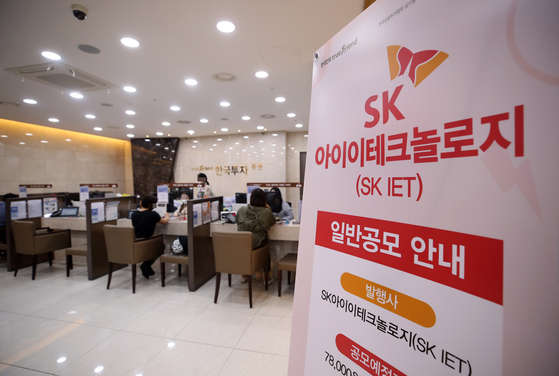 People subscribe to the initial public offering shares of SK ie technology at a sales office of Korea Investment & Securities, one of five brokerages managing the IPO, in Seoul on Wednesday. [YONHAP]


The subscription rate for the initial public offering (IPO) of SK ie technology soared Thursday, with retail investors jumping in on the largest IPO left before the June deadline when subscribing to shares through multiple brokerages will be banned.

Financial regulators plan to ban retail investors from subscribing to IPOs through multiple brokerages likely from June. This will likely lower the chances of retail investors winning shares for popular IPOs with a high subscription rate.

A total of 80.9 trillion won ($73 billion) was deposited during subscriptions, which is a record-breaking amount.

The favorable business prospects of the separator maker were one factor driving up subscriptions.

KTB Investment & Securities said it expects the battery electric car market to grow by 25 percent every year on average from 2020 through 2025. The brokerage projected global separator demand will increase by 31 percent on average every year over the same period. Separators are a key component of electric car batteries, accounting for roughly 16 percent of battery costs.

While the separator company posted 88.1 billion won in net profit last year, its net profit is expected to jump by 58.2 percent to 139.4 billion won, the brokerage projected, citing growth in the separator market and an increase in production capacity of the company.

There are worries, however, that its listing could mimic a series of IPO flops in Korea. Recent large IPOs of local companies including SK Biopharmaceuticals and Kakao Games disappointed investors as their shares declined following the offering.

The flops are largely linked to pricing of IPO shares.

Lee added that if market volatility is reduced as underwriters set optimal prices for publicly offered shares, more experienced investors with a better understanding of share pricing will be able to lead the IPO market.