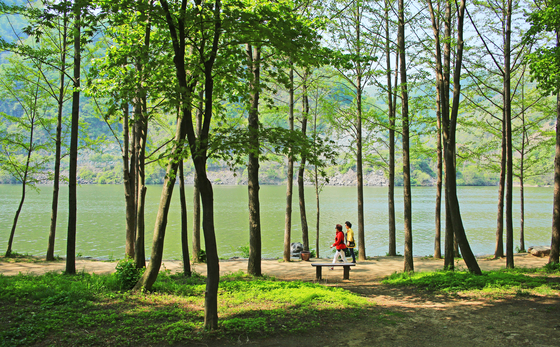 The landscape of Nami Island, which is widely enjoyed by visitors in spring, plays host to the biannual Nami International Children's Book Festival in May. [NAMI ISLAND]


Nami Island in Gyeonggi, a popular picnic destination for all ages, gets a very special makeover in the spring.

It has played host to the Nami Island International Children’s Book Festival biannually since 2005 and decorates space between trees and flowers with books.

The 10th edition of the book festival, which begins on May 1, has chosen Portugal as a country to honor as this year celebrates 60 years of diplomatic relations between Korea and Portugal. The celebration will last until May 16. The event, also known as the NamBook Festival, will provide visitors with a chance to feel like they are experiencing a small town in Portugal through a variety of performances, exhibitions and activities.

To expose children to the stories that they can later read, festival organizers put together shows in many different forms. Fairy tales of Portugal will be told in a performance made with hand puppets and magic tricks while songs about Portugal’s folklore are the basis of a musical theater piece.

Characters from Portuguese books will parade around the island while talented artists will create a scene under the ocean on a large canvas.

For those who want more serious reading time and lessons from writers, the festival organized a sample studio inspired by works of four different Portuguese illustrators. Video messages from the illustrators for the event will be played. 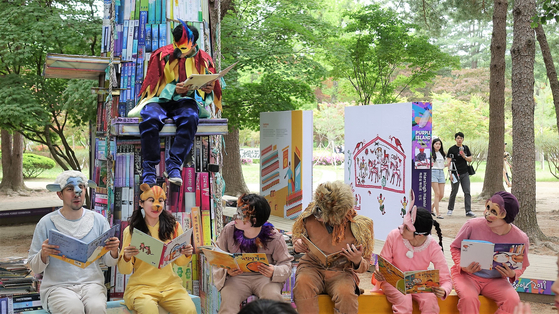 People in costumes gather together to read books at the 2019 edition of the Nami International Children's Book Festival. [NAMI ISLAND]

Winning pieces from a competition held at the last festival will be on display among the trees to inspire visitors to create their own artwork.

Winning pieces from the Biennial of Illustrations Bratislava, one of the oldest international events that honors children’s book illustrators, will also be on display. To inspire people with Portuguese culture, artwork made with azulejos, a tile design widespread and popular in the European country, will also be on show.

“The theme for this year is a Portuguese saying that reads, ‘As long as there’s life, there’s hope,’” said the festival organizer. “We wish that everyone who's tired of dealing with the coronavirus can feel some hope and positive energy.”


Nami Island International Children’s Book Festival runs from May 1 to 16. Admission to the island is 13,000 won ($11.75) for adults, 10,000 won for middle and high school students and 7,000 won for elementary school students or younger. It is free to enjoy the festival but some programs may charge a small fee. If you are driving, the address is 1024 Bukhangangbyeon-ro, Gapyeong-euop, Gapyeong County in Gyeonggi. Alternatively, you can go to Yongsan or Cheongnyangni station, line No. 1 to get on the ITX train, or go to Sangbong Station to get on the Gyeongchun line inter-region train to get to Gapyeong Station. It takes about 50 minutes. From there walk for about 30 minutes until you reach the island.
For more detailed information, go to wwww.nambookfestival.com, or call (02) 753-1246 or (031) 580-8015 or 8193.