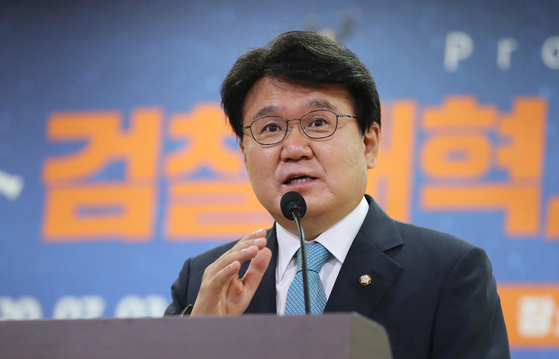 
The Supreme Court on Thursday ruled that ruling Democratic Party (DP) Rep. Hwang Un-ha's 2020 legislative election victory is legitimate, despite being elected while serving as an active-duty police officer.

The nation’s highest court on Thursday dismissed a lawsuit filed by former lawmaker Lee Eun-kwon to invalidate Hwang’s election victory in the April 2020 general election. Lee, of the People Power Party (PPP), was defeated in the election by Hwang in Jung District of Daejeon.

In the petition, Lee challenged the legitimacy of Hwang’s victory because Hwang was an incumbent member of the police at the time. The nation’s election law requires a public servant running for office to quit his or her post 90 days before election day.

The prosecution started an investigation in 2019 that Hwang, while serving as the Ulsan police chief, had meddled in the mayoral election of the city in 2018. The prosecutors suspected that Hwang took orders from the Moon Jae-in Blue House to investigate an opposition candidate for Ulsan mayor shortly before the election in order to sway public opinion against him and help Moon’s friend, Song Cheol-ho, win.

In November 2019, Hwang applied for retirement from the police, but the police rejected his application. The following month, he was removed from head of the agency and assigned to serve as the head of a police research institute.

He, then, submitted a resignation on Jan. 15, 2020, but the police agency did not accept it. The police said a public servant under criminal investigation is not allowed to resign until after the probe is concluded.

Hwang, however, joined the DP the next day on Jan. 16 and was indicted later that month on charges of influencing the Ulsan mayoral election. In March that year, he registered his candidacy and won the April 2020 general election.

As Hwang became a lawmaker, the National Police Agency conditionally discharged Hwang on May 29, 2020, one day before his term began. The police said it was conditionally discharging him to respect the National Assembly Act, which forbids a lawmaker from holding another office. The police said it would restore Hwang's status as a police officer and punish him if he was convicted in the Ulsan mayoral election trial.

Lee of the PPP filed a lawsuit in May last year, arguing that Hwang’s victory is invalid because he won the DP’s nomination as an incumbent public servant — a violation of the Public Official Election Act.

Clause 1 of Article 53 of the law says a public servant who intends to be a candidate shall resign from the post 90 days before election day.

The Supreme Court, however, says Hwang can be considered as having resigned since he had submitted the resignation before the deadline, even though the police did not accepted it.

A lawsuit to invalidate a legislative election victory is handled by the Supreme Court without the possibility of an appeal. Hwang’s case was the first such lawsuit for the 2020 general elections.