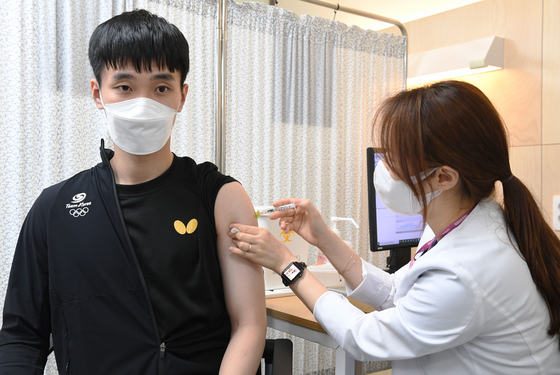 Korean table tennis player Lee Sang-su, who will compete at the Tokyo Olympics, receives a Pfizer vaccine at the National Medical Center in Seoul on Thursday, as the nation begins vaccinating athletes and coaches set to attend the Games. [YONHAP]

The new vaccine incentive comes in addition to Wednesday's announcement, in which the government announced that many people who complete vaccination will be exempt from the mandatory 14-day quarantine after entering from abroad or coming in contact with a Covid-19 patient.

"We will continue to expand measures to return to daily life for those who have completed their vaccinations," Health Minister Kwon Deok-cheol said in a Covid-19 response meeting on Thursday.

"We are planning to allow face-to-face visits [to nursing homes and hospitals] under limited conditions for fully vaccinated people," Kwon added.

Nursing facilities for elderly people accounted for a large number of cluster infections last year, as they often have underlying disease, and are hospitalized or live in groups in the facilities, making them highly vulnerable for Covid-19 infection and fatality.

Currently, patients qualified for face-to-face contact only include patients who are near death, unconscious or suffering from severe disease, or those the doctor deems appropriate for the patient's emotional stability.

The country rolled out its first inoculation campaign starting with the residents and workers under 65 years old at hospitals and nursing homes on Feb. 26, and expanded it to those 65 and over on March 23.

So far, more than 75 percent of residents and workers at nursing homes got their first shots and have shown a significant decrease in infections and deaths, according to the Korea Disease Control and Prevention Agency (KDCA).

"Detailed guidelines are currently being made on whether both [the visitor and patient] have to be inoculated, which personal protective gear should be worn, and what safety guidelines should be made," said KDCA Commissioner Jeong Eun-kyeong in Thursday's briefing.

She added that the country will ease the pre-emptive testing at nursing facilities from twice a week to once a week, and once in a week to once every two weeks for regions with few Covid-19 cases.

The new incentives and rules will only apply to people who completed their vaccinations in Korea and allowed more than two weeks to pass in order to have formed immunity.

"For those who have completed vaccinations abroad, we will come up with ways to verify the authenticity of vaccination certificates issued in the country where they were vaccinated," Jeong said.

"We will [acknowledge other countries' vaccine certificates] gradually by signing agreements or principles of reciprocity [with other countries] in the future," Jeong said, adding, "We are currently in talks with the Foreign Ministry and are considering making a plan for countries with many exchanges first."

People entering Korea from countries where coronavirus variants are prevalent, such as South Africa and Brazil, will still have to do the mandatory quarantine even if they were vaccinated here.

"Currently, the vaccine's effectiveness is known to vary depending on the type of virus mutation," said Jeong.

She continued, "The South African virus variant is known to be less susceptible to the vaccines, so we said we would exclude countries that are prevalent with the South African variant" from the quarantine exemption.

"In case of the Indian variant, we will continue to supplement the necessary measures by further identifying how they react to vaccines and treatments," Jeong added.

The list of countries where virus mutations are prevalent are monitored through the World Health Organization and diplomatic offices, and will be posted on the KDCA website on May 5, where the new exemption rule will start.

Those exempted will be able to return to daily life straight away, but will have to take two Covid-19 polymerase chain reaction (PCR) tests — one six to seven days after entry, and another 12 to 13 days after entry — and report their conditions every day for two weeks to public health officials.

As of Thursday afternoon, 3,012,654 people, or 5.4 percent of Korea's population, have received one dose of the Covid-19 vaccine, reaching the government's goal of administering at least one shot to at least 3 million people by the end of April.

According to the KDCA, 220,729 people were newly jabbed on Wednesday, the largest number of inoculations in a day. The country seeks to give shots to 12 million people within the first half of the year, and reach herd immunity by November. 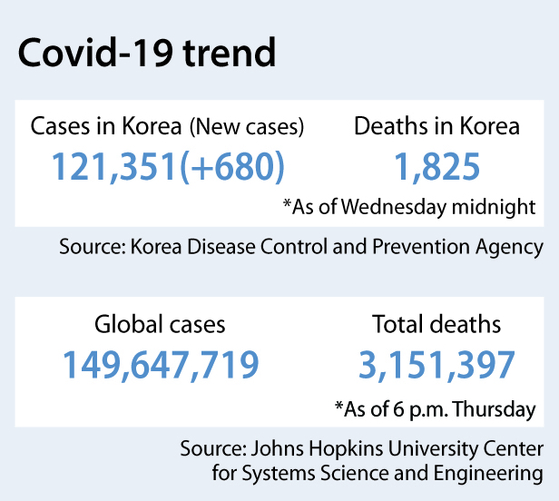