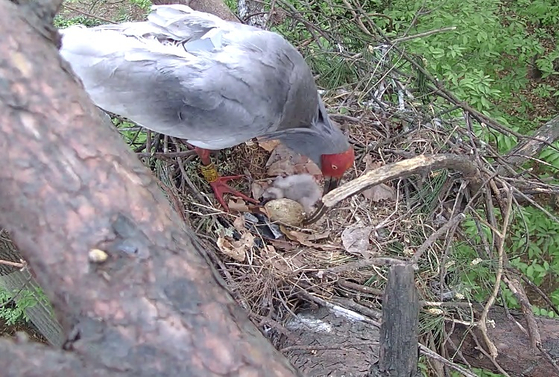 A crested ibis tends to its newborn chick in Changneyong, South Gyeongsang on Thursday. [YONHAP]


Forty-two years after the crested ibis vanished from Korea, two birds from the endangered species were born in the wild on Tuesday.

Two crested ibis chicks hatched from eggs laid by a breeding pair that was released two years ago in the Upo Wetland in Changnyeong, South Gyeongsang, county officials said.

Changnyeong county installed a 24-hour wildlife surveillance camera above the pair's nest to observe the eggs after they were laid. One chick was observed on camera hatching from an egg at 10:12 a.m. on Monday, while another hatched at 5:30 a.m. on Wednesday.

A long, white-plumaged migratory bird, the crested ibis –– called ddaogi in Korean –– was once found throughout northeastern Asia with a range that extended from the Russian Far East to Taiwan.

Designated as the nation's Natural Monument No. 198, the bird was once a common sight across Korea.

Despite the crested ibis' long historical presence in the country –– attested to by references in Korean folk songs –– the bird vanished from the peninsula after a last sighting in 1979 near the Demilitarized Zone.

Destruction of the bird's preferred wetland habitat over the course of the last century, coupled with its already small population size and hunting by humans, brought the species to the brink of extinction across the continent, leaving only a small wild population in Shaanxi Province in China.

Korea began a captive breeding program with the goal of restoring the species in the wild after a pair of the birds was donated by China in 2008. President Xi Jinping presenting another pair to Korea in 2013.

The Crested Ibis Restoration Center was established in 2008 near Upo Wetland, a complex of natural wetlands in Changnyeong, which is home to a total of 342 endangered or threatened species of animals, plants and insects.

The center has thus far bred 432 crested ibises in captivity and released 80 into the wild since 2019. The Ministry of Environment is planning to release another flock of 40 ibises into Upo Wetland on May 6.

The Changnyeong county government said the two chicks who hatched this week were born to a breeding pair released into the wild in 2019. The pair, both born in 2016, were two out of a total of 40 that were reintroduced to the wild that year.

The hatchlings are now being reared by their parents.

Ornithologist Kim Seong-jin, who works at the Crested Ibis Restoration Center, expressed hope in the future of the species in the wild.

"The mother is in very good health and feeding the newborns, which suggests that the breeding pair, which themselves were released into nature, are capable of wild behavior despite being raised in captivity."

The chicks are expected to leave the nest and begin flying freely in the Upo Wetland between June 10 and 12.

The wild-born ibises will be monitored through genetic testing and gender analysis as they grow.