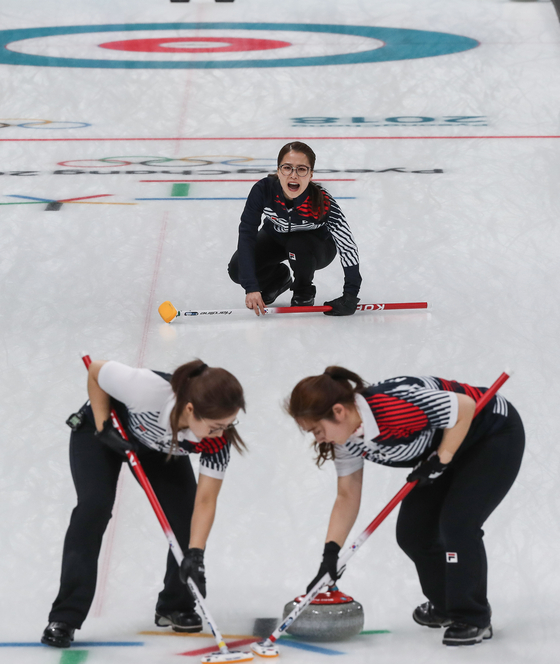 Skip Kim Eun-jung (center) gives orders to Kim Seon-yeong (left) and Kim Yeong-mi (right) in the semi-finals against Japan of the PyeongChang 2018 WInter Olympics in February 23, 2018, at Gangneung Curling Center in Gangneung, Gangwon. Team Kim won silver at the Games in 2018. [YONHAP]


Team Kim, the Korean women’s curling team that played their way into hearts around the world and won a surprise silver at the PyeongChang 2018 Winter Olympics, is back and competing for a 2022 Beijing Winter Olympics berth at the LGT World Women’s Curling Championship in Calgary, Canada.

During the PyeongChang 2018 Winter Olympics, Team Kim went down in history not only for winning a silver medal in a sport that was practically unheard of in Korea, but also for doing it in style with the sportsmanship and team spirit of the five former classmates of Uiseong Girls' High School in rural North Gyeongsang.

In particular, skip Kim Eun-jung's distinctive glasses and emphatic yells of “Yeong-mi” to her teammate Kim Yeong-mi, quickly became one of the biggest global memes of the Games.

But barely nine months after that Cinderella story, the curlers went public with accusations that they had been subject to unfair treatment and verbally and emotionally abuse by their curling coaches and officials in Uiseong. They also revealed that the coaches had withheld nearly 94 million won ($83,600) of prize money.

With Kim Eun-jeong and Kim Yeong-mi both taking leave after getting married and the team still reeling from their mistreatment at the hands of coach Kim Min-jung, her father Kim Kyung-doo and her husband, Jang Ban-seok, the team fell into a slump and lost their spot as the national squad.

After two years in the background, Team Kim won back their position as the Korean national team in November last year, but had been training without an official team after the contract with the Gyeongsangbukdo Sports Council expired.

With nowhere to train and no financial support, Team Kim were saved by Gangneung, the second host city of the PyeongChang Games, which decided to set up its own team, using the curling center originally built for the Winter Olympics.

The curlers were scheduled to participate in the 2021 World Women's Curling Championships in Schaffhausen, Switzerland, in mid-March, but the tournament was canceled for a second year due to Covid-19. 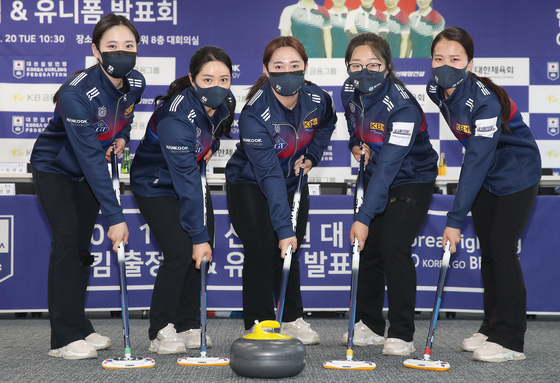 
Team Kim will open the championship against Team Tirinzoni of Switzerland on Friday.

Team Kim beat Team Tirinizoni back in 2018 at the Games, winning 7-5, while Switzerland was unable to advance to the playoffs.

From May 1 to 5, Team Kim will then go on to face Russia, the United States, Germany, Scotland, Italy, Canada and Estonia.

On May 6, Team Kim will compete against Denmark, Japan, China and will once again face Sweden’s Team Hasselborg, the team that defeated them at the Pyeongchang Olympic finals.

On May 7, Team Korea will play the last preliminary game against the Czech Republic.

Team Kim will be looking to finish at least within the top six teams to avoid having to play the preliminary rounds at the 2022 Beijing Olympics.

The top two teams will advance straight to the semifinals on May 9, and the third to sixth teams will compete in the playoffs.

The championship games run from April 30 through May 9 at the Canada Olympic Park in Calgary. The first game between Team Kim and Team Tirinzoni will be at 9 a.m. on Friday, or at midnight on Friday night in Korea.