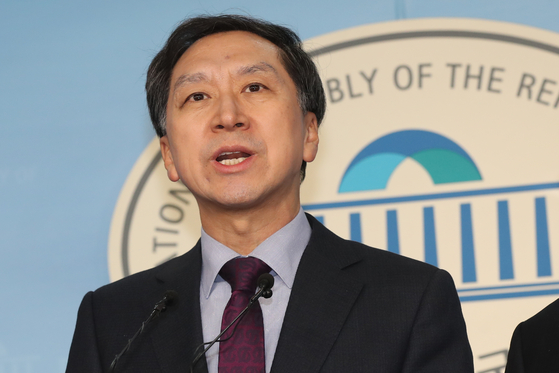 
The main opposition People Power Party (PPP) on Friday elected Rep. Kim Gi-hyeon as its new floor leader to steer the party in the crucial year leading up to the presidential election.

The largest opposition party voted in the morning and elected Kim, a 4-term lawmaker representing Nam B District of Ulsan. All 101 lawmakers of the PPP participated in the vote.

In the first round of voting, Kim Gi-hyeon won 34 votes and Kim Tae-heum followed with 30. Kweon received 20 and Yu 17.

Kim, 62, is a former judge. He became a politician in 2003 when he took on the role of deputy spokesman of the Grand National Party, an ancestor of the PPP.

After three legislative victories in Ulsan, he ran in the Ulsan mayoral election in 2014 and won.

In 2018, he was defeated in the mayoral race by President Moon Jae-in’s friend Song Cheol-ho. Kim is the alleged victim in the prosecution’s investigation into suspicions that top members of the Blue House abused their power to influence the mayoral race. Kim and prosecutors have accused Blue House officials of ordering police to launch a probe into him on the eve of the 2018 election in a bid to damage his reputation.

He ran for a fourth term as a lawmaker in 2020 and was elected.

As the new floor leader of the largest opposition party, Kim will have to face tough negotiations against the ruling Democratic Party (DP), as it recently elected Rep. Yun Ho-jung, an aggressive loyalist of President Moon, as its chief negotiator. Yun already announced that he will push forward more reform measures to weaken the powers of the prosecution and media.

Kim will also play a key role in the PPP’s planned merger with Ahn Cheol-soo’s People’s Party. Over the past weeks, outgoing floor leader Joo Ho-young of the PPP had talked about the merger with Ahn but no progress has been made.

He will also oversee the party until it elects new leadership including a chairman. The PPP is expected to hold a national convention and elect a new head in late May or early June.