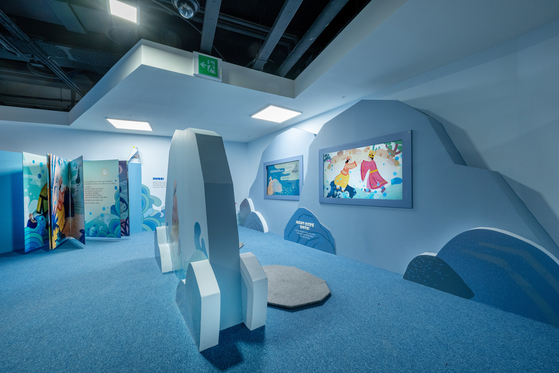 
Just in time for the upcoming Children’s Day on May 5, the Children's Folk Museum of Korea inside the National Folk Museum in central Seoul, refurbished its Permanent Exhibition Hall on the first floor and opened a new exhibit “Say ‘Hello.’”

The museum’s Permanent Exhibition Hall has so far been showcasing different Korean folktales, which have been adapted to appeal to children, retelling the stories using colorful illustrations and interactive games. At the end of the exhibit, children can also learn about folk items on display that are associated with the topic of the exhibit. For the newly organized exhibit, children can enjoy three different folktales — “Gyeonu and Jingnyeo,” “Barigongju” and “Yeonorang and Seonyeo.”

“Upon entering the exhibition hall, children will feel like they are going on a trip to learn about three different folktales of Korea,” said Kim Chang-ho, curator of the exhibit. “We’ve selected the three folktales that center around the theme ‘encounter’ as it is difficult to meet our friends and relatives amid the coronavirus pandemic. By introducing the stories that finally end with happy encounters, we hope children can also look forward to finally meeting their friends when we are through with the pandemic.” 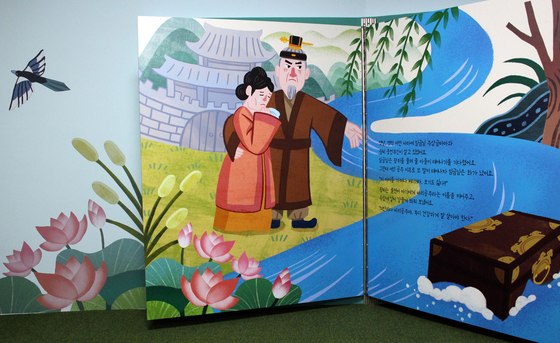 
The exhibit begins with the “Crow-magpie Station,” which tells the story about “Gyeonu and Jingyeo,” also known as “The Weaver and the Cow Herdsman” in English.

The story is about two lovers Jingnyeo, who is a weaver girl and a daughter of the Sky King, or the ruler of the universe, and Gyeonu, a cow herdsman. The king decides to introduce his lonely daughter to Gyeonu and the two quickly fall in love and got married. But their affection toward each other grows so big that they neglect everything else outside their romance. Jingnyeo stops weaving, leaving the king and his servants with no clothes and Gyeonu leaves his herd unattended. The king becomes furious and decides to separate the couple by putting them on opposite sides of the Milky Way. The couple’s cries and sadness deeply move all the magpies and ravens, inspiring them to fly up to the heavens once a year to make a bridge across the Milky Way, so that the lovers can have a precious reunion.

After reading about the story on a large book with colorful illustrations, children are asked to help the magpies fly up to the heavens and make a bridge together.

According to Kim, all the interactive games and missions available at the exhibit “require children to actively move their bodies. We intentionally selected such games that require a physically active mindset as many children have been stuck at home, with lack of physical activities.” 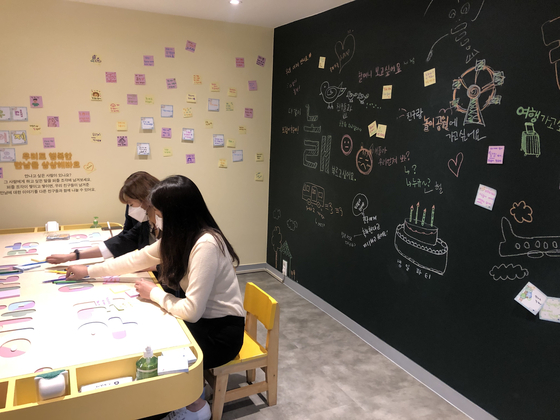 The final section of the exhibit invites children to sit down and write or draw pictures about who they most want to meet after the pandemic is over. [YIM SEUNG-HYE] 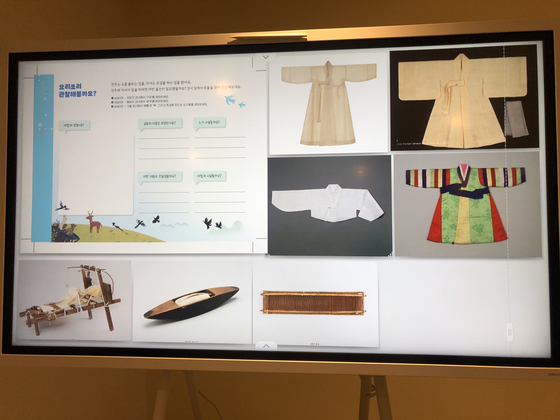 At the end of the exhibit, children can learn about folk artifacts of Korea that are associated with the three folktales introduced in the exhibit. [YIM SEUNG-HYE]


At the end of the exhibit, visitors are also invited to learn about different folk artifacts that are associated with the three tales such as Korea’s traditional manger that Gyeonu used to feed his cows.

Because of all the physical activity, the museum decided to limit each 50 minute session to 30 visitors. Five or six sessions will be held everyday and the museum will thoroughly disinfect the exhibit between each session.

Aside from the exhibit, the museum is also gearing up to hold its annual Children’s Day Festival on May 5, which is a public holiday. It has organized diverse online and offline programs for children, including a craft class that teaches children to make hand-held fans using hanji, or Korean traditional paper and a class about different outdoor games played by Korean children in the 1950s. A musical titled “A Tiger with Filial Love” will also be performed at 11:30 a.m. and again at 3:30 p.m., and streamed live via museum’s official YouTube channel.

“It’s a shame we can’t celebrate this holiday as a grand festival following the rising number of Covid-19 cases, but we feel obliged to still provide children with a safe environment and entertaining programs for the upcoming Children’s Day,” said Kim Jong-dae, director of the National Folk Museum of Korea.

Visitors should make an online reservation at the museum’s website kidsnfm.go.kr to visit the exhibit and the festival. The museum said it will allow 50 on-site visitors on May 5, on a first come first served basis. Some 100 visitors will be able to enjoy the offline festival at the museum, located in central Seoul.