Srdan Golubovic's fourth feature film "Father" revolves around one father's struggle against the corrupt social system in Serbia as he tries to get his children back. [JIFF]


Serbian director Srdan Golubovic’s “Father” paints a dismal, shocking picture in the impoverished Serbian countryside: A desperate mother with two children tagging along visits her husband’s place of employment as a day laborer and demands long-overdue pay. She threatens to immolate herself, and makes good on the threat, in front of the workers and her children.

The mother is admitted to a psychiatric hospital, and the two children become wards of the state. Their farther Nikola is not allowed to see them, and he is told he’s not “equipped” to provide care to his children because of his job instability and dysfunctional home.

Poverty is a form of violence against children, the social workers say, and his children are placed in foster homes. Nikola perceives injustice and corruption, and he decides to file an appeal. To show that he cares, he walks some 300 kilometers to Belgrade to directly submit the appeal to the minister himself.

“Father” opened the 22nd Jeonju International Film Festival, which runs through May 8. In an online interview with Korea JoongAng Daily on Friday, Golubovic said that the film was based on a true story of a father who walked 300 kilometers to protest in front of government offices for the return of his children.

“But all the circumstances of how he fights and what happened are different,” he said. “The most important message is not about the corruption and the injustice of the bureaucratic social system. [It’s about] a man who’s completely destroyed, who’s rejected by the society gets back his dignity through his long journey.”

Nikola rarely vents his frustration or anger and remains calm through the film. He can speak when he must but hardly raises his voice. His silence and empty stares dominate the run time.

“I think that people who live in that kind of poverty, they don’t have the luxury to express their emotions because they’re only focused on surviving,” Golubovic said. “I think that expressing emotions is a luxury for us people who have normal lives. Nikola learned to survive like an animal. Expressing his feelings was a weakness.”

The director believes that Nikola possessed the strength and the courage to fight because he was demanding what was rightfully his: His paternal right to take care of his children. 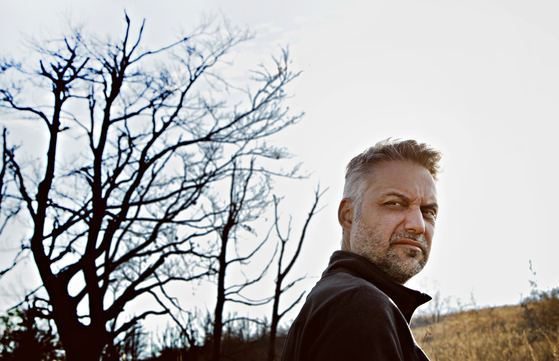 “The biggest challenge for us was that both of us were never in touch with that kind of poverty,” Golubovic said. “It was very important for us to not to be arrogant against this character and just try to follow this man, this character.”

“Father” is Golubovic's fourth feature film, and all of his films are in touch with social injustice and the aftermath of war. The director said that it was his motivation for his works to stay connected to reality.

“I think that film can’t be a servant of society,” he said. “I’m trying to make some artistic destiny and I [want] my films to provoke reality in my country, like my favorite Korean director Lee Chang-dong is doing in his films.”

His films are also connected to fatherhood, as his second film “The Trap” (2007) revolves around a father struggling with moral conscience to earn enough money for his son’s surgery.

"It was startling” and really disturbing, he admitted. “I don’t know exactly why I’m always back to the stories about paternity. I think that maybe the reason is that I lost my father when I was really young.”

“The difference between ‘The Trap’ and this film ‘Father’ is that when I was shooting ‘The Trap’ I was not a father,” he continued. “And I think I made a film about a father from my projection, what it means to be a father. With this film, I made from another perspective, from the perspective of a real father so that's the subject that I'm really connected with.”

The director also mentioned corruption and inefficacy in local social welfare system, such as how foster families are paid more than real parents to take care of the children. His belief shows in the film’s ending as well, when Nikola returns to his home to find that all of his family’s belongings were stolen by his neighbors. Upon hearing this, Nikola marches into their homes and takes back his things; It’s almost comical to see the guilt-ridden expressions of his neighbors as they silently watch him take his things, or even sneakily puts his things outside their doors so they won’t have to face him.

“It was really important for me because I didn’t want to make those people bad,” he said. “I didn’t want to make this a village of evils. They’re in the same situation like him. They stole his things because of their weakness. And at the end when they see him take back his things, they’re really ashamed because they’re not bad people. They’re just weak. It’s the system that made them weak and bad.”

The poverty portrayed in the film is not the mainstream society, the director says.

Poor people are invisible, he said. “They’re very ashamed of their poverty. They think that poorness is the stamp which they deserve."

Golubovic emphasized that people like Nikola don’t need much to rise from their station.

“They don’t need much, they need just the small support so that they can survive,” he said.