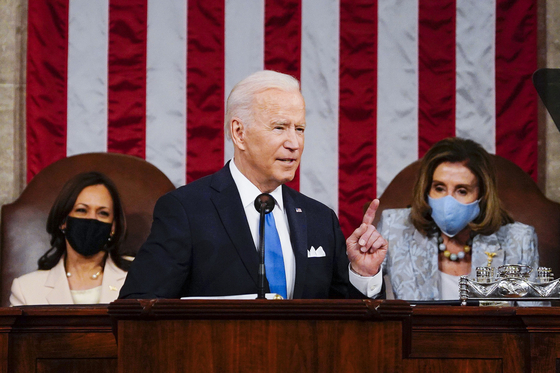 U.S. President Joe Biden addresses a joint session of Congress in Washington last Wednesday, ahead of the White House announcing it concluded its review of North Korea policy Friday. North Korea warned Sunday that the United States will face “a very grave situation” because Biden ″made a big blunder″ in his congressional address calling the North a “security threat.” [AP/YONHAP]


A day after the United States announced it will not seek a "grand bargain" in denuclearization negotiations with North Korea and pursue a “calibrated” diplomacy, Pyongyang ratcheted up its bellicose rhetoric lambasting Washington and Seoul in a series of statements Sunday.

The White House confirmed Friday that it had completed its monthslong review of North Korea policy that aims for “the complete denuclearization of the Korean Peninsula,” opting for a “practical” approach.

“I can confirm that we’ve completed our DPRK policy review, which was thorough, rigorous, and inclusive,” Jen Psaki, the White House spokesperson, told reporters aboard the Air Force One, en route to Philadelphia, referring to the acronym for the North's official name, the Democratic People's Republic of Korea.

“With a clear understanding that the efforts of the past four administrations have not achieved this objective, our policy will not focus on achieving a grand bargain, nor will it rely on strategic patience,” said Psaki.

Analysts say that the Joe Biden administration is seeking a middle ground on its policy for North Korean denuclearization between former U.S. President Donald Trump’s top-down approach aiming at a big deal of sorts and the Barack Obama administration's strategic patience stance.

Psaki continued, “Our policy calls for a calibrated, practical approach that is open to and will explore diplomacy with the DPRK, and to make practical progress that increases the security of the United States, our allies, and deployed forces.”

She noted that allies South Korea and Japan will be consulted “at every step along the way,” adding that “their input and also the approaches we’ve taken in the past have all played a role in this effort.”

Her remarks indicated that the review reflected to some extent the Singapore statement in which North Korean leader Kim Jong-un and Trump agreed to complete denuclearization for security guarantees during their first summit in Singapore in June 2018.

This comes despite the Biden administration appearing to extend a hand to Kim through its preview of its concluded policy review.

Kwon Jong-gun, director general of the North Korean Foreign Ministry’s Department of U.S. Affairs, said, “The U.S. will face worse and worse crisis beyond control in the near future if it is set to approach the DPRK-U.S. ties, still holding on the outdated policy from Cold War-minded perspective and viewpoint.”

He warned that as the United States’ “new DPRK policy has become clear, we will be compelled to press for corresponding measures, and with time the U.S. will find itself in a very grave situation.”

Kim, the deputy department director of the North’s ruling Workers' Party’s Central Committee, said in her latest statement released by the KCNA Sunday, “We regard the maneuvers committed by the human wastes in the south as a serious provocation against our state and will look into corresponding action.”

She likewise didn’t elaborate further on what action Pyongyang might take.

On Friday, Fighters for a Free North Korea, a civic group led by North Korean defector Park Sang-hak, said that it had flown 10 large balloons carrying around 500,000 leaflets, 500 booklets and 5,000 $1 bills from border areas in Gyeonggi and Gangwon into the North in the past four days.

This marks the first time anti-Pyongyang leaflets have been flown across the border since the South Korean National Assembly’s controversial new law banning such acts was implemented in March.

Kim Yo-jong in June 2020 issued a similar statement lambasting the anti-Pyongyang propaganda leaflets, warning of consequences. Pyongyang later that month on June 16 blew up the inter-Korean liaison office in the North’s border city of Kaesong.

The Foreign Ministry accused the United States of using the human rights issue “as a tool for interference in our internal affairs and a political weapon for overturning our social system.”

The ministry warned that Washington will “get hurt if it provokes us,” adding it will “certainly regret... defying our warnings.”

Pyongyang’s barrage of statements appeared mindful of South Korean President Moon Jae-in’s upcoming summit with President Biden on May 21 in Washington, during which the two sides are expected to coordinate North Korea policy including the U.S. review results.

Seoul’s Ministry of Unification in response to Kim’s statement, said, “We oppose all actions by all parties, including North Korea, that could heighten tensions on the Korean Peninsula.”

The ministry added, "The government has done its best to implement inter-Korean agreements and to advance peace on the Korean Peninsula.”

It also called for the strict adherence to the anti-leaflet ban aimed at protecting the lives and safety of residents living near the inter-Korean border. 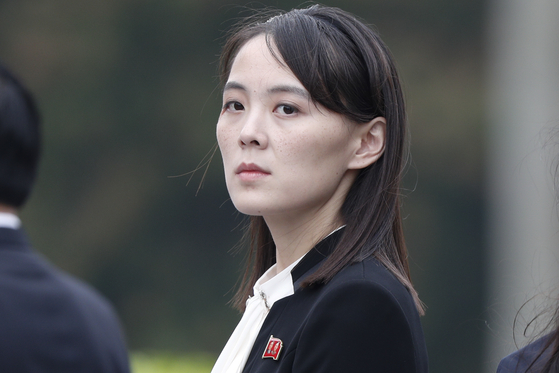 Kim Yo-jong, the sister of North Korean leader Kim Jong-un, pictured in a photo from March 2019 in Vietnam, strongly criticized South Korea Sunday for its failure to stop anti-Pyongyang leaflets flown by a defector group last week, calling it an ″intolerable provocation.” [YONHAP]