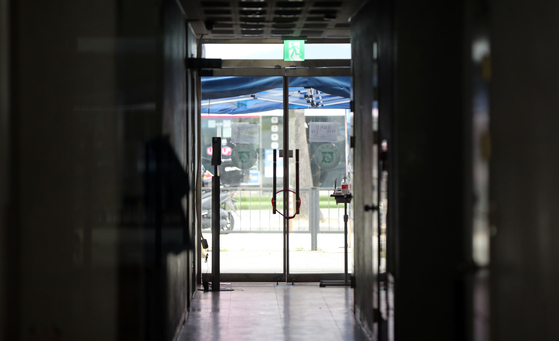 A vaccination center in Buk District in Gwangju is shuttered Sunday as it temporarily suspends the first vaccinations of people over 75 amid a shortage of Pfizer vaccine supplies. Health authorities requested local governments halt scheduling appointments for first jabs to ensure there is enough supply for second inoculations. [YONHAP]


Korea may be facing a vaccine shortage soon with the administering of first Pfizer shots coming to a temporary halt in some cities and health authorities warning that AstraZeneca doses are also running short.

The Korea Disease Control and Prevention Agency (KDCA) said Sunday that less than 10 percent of the country's AstraZeneca vaccine doses are left, which could be a further setback to Korea’s inoculation targets.

The Seoul Metropolitan Government said Friday it will temporarily suspend giving first shots of the Pfizer Covid-19 vaccine in May to more effectively inoculate those scheduled for second shots. The city government said it has issued an order to district offices to refrain from scheduling new appointments for people to receive their first Pfizer shot this month, following a request from the KDCA.

Currently, the two-dose regimen Pfizer vaccine is being administered to Koreans over the age of 75 who made appointments at their local district offices and can get jabs when scheduled at the nearest vaccination center. Those who have received a first shot are scheduled to receive the second three weeks later.

As of Saturday midnight, 3.631 million people have received at least their first Covid-19 vaccine shot since the country started its vaccination program in late February, or 6.9 percent of the country’s total population, according to the KDCA.

Over 1.829 million people have been administered with at least their first AstraZeneca jabs, while 1.565 million received Pfizer shots.

However, it is unclear if Korea can keep to its inoculation target of vaccinating 12 million people out of a total of 52 million by the end of June and achieve herd immunity by November.

The KDCA said that there is enough Pfizer vaccines to inoculate those over 75, saying it has received doses to cover over 1 million people. An additional 1.75 million Pfizer doses are set to arrive this month followed by 3.54 million in June. There are nearly 3.5 million people over 75 who are eligible for inoculations.

Likewise, Korea has secured some 2 million AstraZeneca vaccine doses so far, according to the KDCA, but only 176,761 are left, which can be stretched to cover 200,000 people using low dead space (LDS) syringes meant to maximize the doses.

Vaccinations of residents and staff at nursing facilities, medical institutions and essential social service workers are supposed to start later this month, but the vaccine supply shortage is a looming concern.

The KDCA said 79 deaths after vaccination have been reported, up four from the previous day, though the exact causes of the deaths remain unknown.

The Korean government decided Friday to extend its current social distancing rules and ban on private gatherings of five or more people for three more weeks, while daily Covid-19 cases remained in the 600s for a fourth consecutive day Sunday.

The current social distancing scheme will run through May 23, amid a series of holidays this month including Children’s Day on Wednesday. Seoul has Level 2 social distancing measures in place, the third highest in the five-tier scheme, with most of the country under Level 1.5, with some exceptions for areas with a high number of infections. 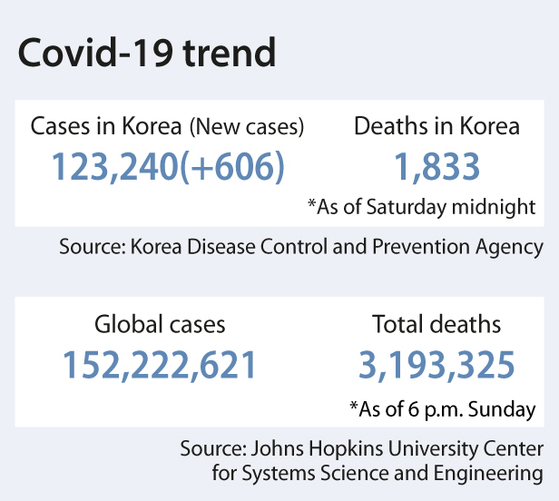 Sunday's figure saw a slight drop compared to 627 on Saturday and 661 on Friday. There were two more fatalities, raising the total death toll to 1,833.

There were 21 new imported cases, down 34 from the previous day.

Of the locally transmitted cases, 177 new cases were reported in Seoul, 140 in Gyeonggi and 17 in Incheon.

Outside the metropolitan area, 61 cases were reported in South Gyeongsang, 51 in Ulsan, 31 in Busan and 30 in North Gyeongsang.

The KDCA said that the average domestic daily cases in the past week came to 594.6, while 42.9 percent of cases were now outside the Seoul metropolitan area. Infections spread in workplaces, churches and private gatherings.