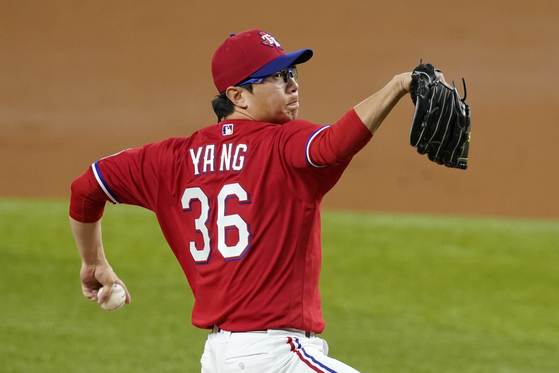 
Yang Hyeon-jong's second major league outing was even more impressive than his first, with the southpaw allowing no runs in four and one third innings in the Texas Rangers' loss to the Boston Red Sox on Friday.

Yang was once again brought into the game in the third inning when the Rangers were already down 6-1. Yang stopped the bleeding, allowing just one hit in four and one third innings while recording four strikeouts and one walk at Globe Life Field in Arlington, Texas.

Yang threw 36 strikes in 51 pitches, with his ERA falling from 4.15 to 2.08 after two appearances for the Rangers.

Yang was a franchise star with the Kia Tigers and one of the most respected starters in the KBO before moving to the majors. The Rangers appear to have already recognized this ability in Yang, using him as a long reliever that steps in and shuts the door after a starting pitcher has been roughed up.

Yang entered Friday's game in the third inning with a runner on base and two outs, throwing just one pitch to get a lineout and end the inning.

He threw nine pitches in the fourth to take down the Red Sox in order, before allowing a single and a walk in the fifth, but with no damage done. The sixth and the seventh went down in order, with Yang ending his game with back-to-back strikeouts to J. D. Martinez and Xander Bogaerts to finish the seventh.

Yang was called up to the majors on April 26, also throwing four and one third innings in his MLB debut. He gave up five hits and two runs in that outing and showed off his impressive stamina at the mound. Yang walked away from his first game with the second-longest appearance for a pitcher debuting in relief in Texas Rangers history.