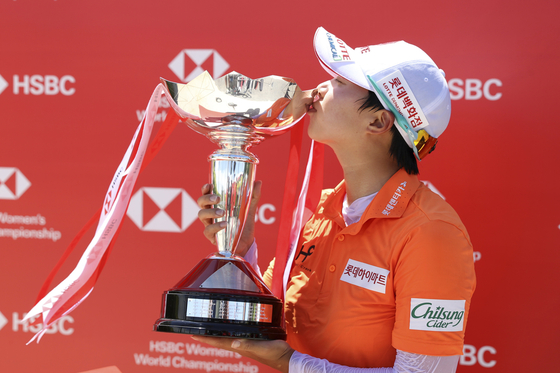 
Kim Hyo-joo picked up her fourth LPGA Tour win with a big 17 under par at the 2021 HSBC Women's World Championship at the Sentosa Golf Club in Singapore on Sunday.

The 26-year-old golfer came from behind with a final round of eight-under, 64, to take the title and a purse of $240,000, beating Hannah Green of Australia by one stroke.

Kim was tied for eighth going into the final round after making six bogies in the third round. She was five strokes behind Xiyu Lin of China, who topped the scoreboard at that point.

On the par-4 11th, Kim made a birdie with a putt from outside the green. Missing an eagle chance at the par-4 12th, she came back with a birdie to catch up with the leading group.

However, Green scored an eagle on the 14th to catch up with Kim, who was playing in an earlier group. Kim finished the last hole with a par, and then had to watch from the sidelines to see if Green would be able to catch up.

Green birdied the par-5 16th and looked like she might take the title, but then made back-to-back bogies on the last two holes to hand the championship to Kim.

As Green missed her par putt on the par-4 18th, Kim found out she'd won while she was eating in the club house.

“I was very happy with my no-bogey play today” Kim said. “I thought that it would go to a playoff and I was eating because I wanted to eat before the playoffs.”

This is Kim’s first win on the LPGA Tour in five years and three months, since the Pure Silk Bahamas LPGA Classic on February 1, 2016.

Before that, Kim won the Evian Championship in 2014 and the Founders Cup in 2015.

"Since it's a win after such a long time, it feels like my first win," Kim said. "It feels like a dream at this moment."

Last year, Kim played on the KLPGA Tour due to the coronavirus pandemic, playing 14 events where she earned two victories and six top-10 finishes. Kim also led the KLPGA in official earnings.

“Getting into this season, I was looking for at least one win.” said Kim. “I tried to adapt what I have learned from the KLPGA to the LPGA and I think playing at the KLPGA last year helped a lot”.

Kim also commented on the upcoming 2020 Tokyo Olympics, where competition will be fierce to earn the chance to represent Korea.

"Representing my home country definitely means a lot to me," Kim said "I think I would feel proud and responsible wearing the Korean flag."

Only four Koreans ranked above 15 at the end of June will qualify for the Tokyo Olympics.


Despite tying for first earlier in the day, Park In-bee finished tied at third alongside Lin of China and Patty Tavatanakit of Thailand with a 15-under 273.

Jeon In-ji tied for seventh place with Lydia Ko of New Zealand with an 11-under 277.

The LPGA Tour will be back in action on Thursday at the Honda LPGA Thailand in Chonburi, Thailand.