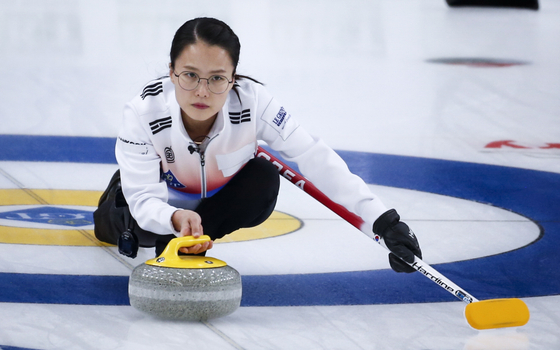 Korea skip Kim Eun-jung makes a shot against the United States during a match at the Women's World Curling Championship in Calgary, Canada on May 1.


Despite entering the tournament as the second-highest ranked team, Korea got off to an inauspicious start at the Women's World Curling Championship, dropping their first four matches over the weekend.

Korea's Team Kim appeared in the opening game against reigning champions Switzerland on Friday, losing 10-2. Korea returned to the ice later that same day for a third-round game against Russia, again losing 8-7.

On Saturday, Team Kim took on the United States, losing that game 11-5, before dropping another close-run match later in the day against Germany, 10-9.

Despite dropping four games in a row, Korea still has an opportunity to work their way back into the tournament. Team Kim on Sunday were due to face Scotland and Italy on Sunday as of press time, with seven more matches still remaining throughout the coming week.

The 2021 Women's World Curling Championship marks the return of Team Kim as the Korean national curling team. During the PyeongChang 2018 Winter Olympics, Team Kim went down in history not only for winning a silver medal in a sport that was practically unheard of in Korea, but also for doing it in style.

The top six teams from the world championships will skip the preliminary rounds at the 2022 Beijing Olympics.