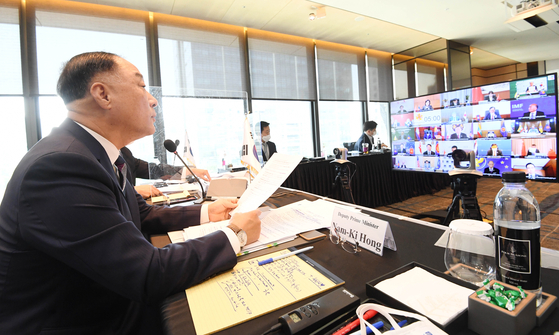 Korean Finance MInister Hong Nam-ki attends the Asean+3 meeting via video in Seoul on Monday. [MINISTRY OF ECONOMY AND FINANCE]

Korea’s finance minister called for cooperation among Korea, China and Japan to avoid uneven economic recovery in the region and downside risks that may emerge.

“We need to strengthen the safety net in three areas – finances, the global supply chain and public health measures – for sustainable development in overcoming the pandemic crisis and the changing economic structure that came with Covid-19,” said Hong Nam-ki, who is also deputy prime minister for the economy, on Monday while participating a meeting of finance ministers and central bank governors of the Asean+3 –Korea, China and Japan -- nations.

This year, Korea jointly hosted the annual meeting with Brunei. It was held online due to Covid-19.

An uneven economic recovery in Asia despite government efforts and vaccine rollouts were key issues addressed during the meeting.

Hong said Asean+3 has developed into a close partnership among member countries for the good of the region in overcoming major economic crises, including the Asian financial crisis of the late 1990s and the global financial meltdown in 2008.

“We need to take the Covid-19 crisis as an opportunity for strengthening policy cooperation,” Hong said.

During the meeting, he reaffirmed the Korean government’s decision to continue its expansionary monetary policy until the country’s recovery exceeds that of projections.

“Our plan is to optimize the fiscal effects,” Hong said.

“Through effective public health measures along with expansionary fiscal and monetary policies, Korea was able to minimize the impact of Covid-19 [in 2020] and was one of the major advanced economies whose GDP quickly recovered to pre-pandemic level,” Hong said.

According to Bank of Korea last week, Korea's GDP in the first quarter grew 1.8 percent compared to the previous year. This was the first positive year-on-year growth since January 2020.

The economy has been contracting since the number of people infected with Covid-19 spiked in March 2020.

Major institutions have been revising Korea’s outlook for this year. The latest was the Asian Development Bank (ADB), which raised Korea’s outlook from 3.3 percent to 3.5 percent. The International Monetary Fund was even more positive: it projected Korea’s economy to grow 3.6 percent by the end of this year.

If so, it would be sharpest economic growth in a decade. The last time the Korean economy grew at this level was in 2011, when it grew 3.7 percent.

It would also be the second 3-percent GDP growth since the Moon Jae-in government took office in 2017.

That was the sharpest year-on-year increase since January 2011.

There are also signs of the domestic economy improving with consumer sentiment on the rise despite the government's fumbled vaccine plan.

“The first quarter performance exceeded our expectation,” Hong said. “Once the global economic recovery starts, our economy will exceed the earlier [government] projection of 3.2 percent growth for 2021.”