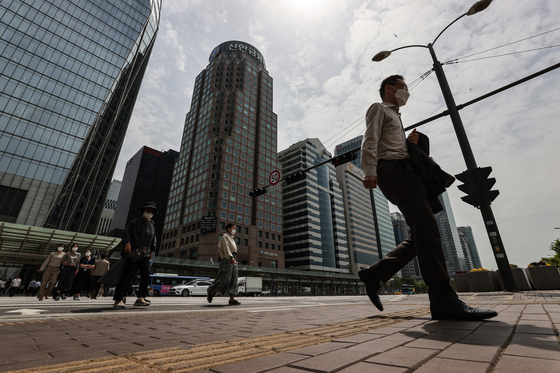 Office workers in Yeouido, Seoul, in April. People in their 40s have very little left after paying for necessities at the end of the month. [YONHAP]


City residents in their 40s have almost nothing left after paying for necessities and education and lack excess fund to bank for retirement, according to a recent study.

About three-quarters of after-tax income is used for these expenses.

The average urban dweller in their 40s earns 4.68 million won ($4,191) a month after taxes are paid, Hana Bank said in a report released on Monday, and of that 73 percent is spent on daily expenses and schooling costs.

About 13 percent goes toward education, which includes tutoring costs.

After other costs, they are left with about 1.26 million won.

Of those surveyed, 48 percent said retirement income will be a pension, 36 percent said savings and 31 percent said a paycheck, with multiple answers allowed. Only 27 percent mentioned investment products.

The majority said disposable income is insufficient for retirement savings.

Of those surveyed, only 39 percent believe their income will increase after 10 years, while the rest see their income at the current level or lower.

The situation is more difficult for those in the lower income groups as many said their debt has increased since Covid-19 started.