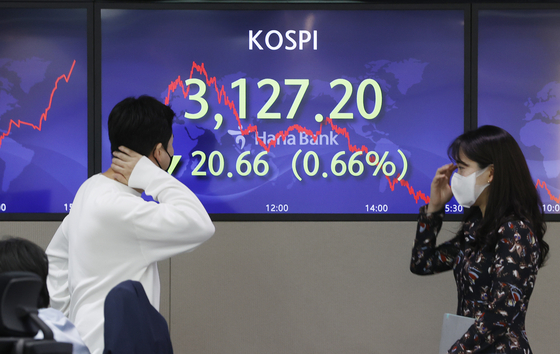 A screen in Hana Bank's trading room in central Seoul shows the Kospi closing at 3,127.20 points on Monday, down 20.66 points, or 0.66 percent from the previous trading day. [YONHAP]


Stocks slumped for a fifth day on Monday, the first day of partially resumed short selling, as concerns of a virus flare-up and bio losses drove down the key stock index. The won fell against the dollar.

Trading volume was moderate at about 1 billion shares worth some 16.7 trillion won ($14.9 billion), with losers outnumbering gainers 509 to 359.

The Kospi got off to a choppy start, as investors took to the sidelines on the first day of partially resumed short selling.

The key stock index fluctuated between gains and losses after a four-session losing streak, as investors weighed the outlook for listed firms.