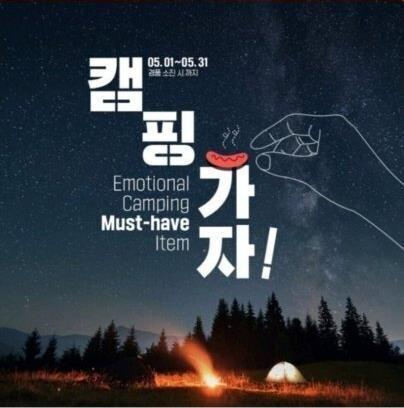 
GS25 is facing a backlash over a camping food poster that some people see as a reference to radical feminism and misandry, or hatred of men.

The convenience store chain apologized Sunday for causing controversy, but some are calling for a GS25 boycott.

The controversial poster, released on Saturday, showed an image of a hand about to grab a small sausage. The poster has an English slogan, “Emotional Camping Must-have Item.”

GS25 was promoting freebies being offered to anyone who buys camping food on the company’s mobile app.

But some sharp-eyed people thought the poster was making references to a radical feminist online community called Megalia.

They said the shape of the hand in the poster is like Megalia's logo, which in itself is a reference to a gesture associated with misandry.

They also argued that the last letters of each word in the poster's slogan “Emotional Camping Must-have Item,” if read in reverse, read Megla, which is close to Megalia.

GS25 released a second poster without the image of the hand or the sausage. Instead, it included a moon shape and three stars.

That backfired too, because some people said it resembles a symbol of a feminist group at Seoul National University.


The company “is internally studying this issue seriously," said GS25 in a statement. “We are very sorry if customers have experienced discomfort over this May event.”

The poster controversy was an echo of another GS25 public relations debacle from last June.

GS25 was promoting a collaboration with the Ministry of National Defense and released a poster with images of soldiers, a Rose of Sharon and a flying bird.

The first letter of each word on the poster formed a Korean word used to criticize men who always talk about their experiences in the military.


For that controversy, some people started saying the ministry should end its contract with GS25, which has exclusive deal to run stores in more than 200 Navy military camps.

The new controversy breathed life into the old one. One person filed a petition on the Blue House website Sunday demanding the contract be ended.

“GS25 mocked the devotion and hard work of soldiers and took advantage of soldiers’ hard work,” wrote the petitioner on Sunday. “GS25 ... should no longer gain the right to benefit [from the military].”

The petition gained more than 40,000 signatures as of Monday afternoon.

If the petition gets more than 200,000 signatures within 30 days, the government is required to respond.

Anyone can earn money handling local deliveries for GS25