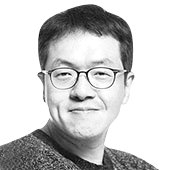 
The case of 34-year-old Kim Jeong-sik has been referred to the prosecution for distributing leaflets allegedly insulting President Moon Jae-in two years ago. “Insult” is an offense subject to complaint by the victim under the criminal law. President Moon Jae-in said in the past that insulting a president could be within the boundaries of freedom of speech. “It’s a good thing if someone feels better by insulting the president,” he said.

On the leaflet, Kim wrote, “The red identity of North Korea’s dog President Moon Jae-in” You could be displeased by the expression, but North Korea has hurled worse at the president in the past. On April 29, a Blue House official said the leaflets could not be condoned as they were very extreme. As President Moon is also a human, he can sue the man for defamation if he feels his human dignity was infringed.

If so, the president should reveal that he sued the person and why. That’s transparency and democratic leadership. But President Moon hid it. Kim asked the police who filed the complaint, but the police didn’t tell him.

Why was it hidden? The Blue House must have known the effects of the president’s filing a complaint against the offender. If Moon did not want the controversy, he shouldn’t have filed it. But he filed the complaint and tried to minimize making it public. The president wanted to exercise his right as a citizen but avoid the criticism as a power holder. That’s a typical double standard.

The same applies to the dinner attended by five people at the Blue House. The president would not want to exclude any one of the departing aides. He invited four to dinner on April 19, and it ended up violating a ban on gathering of more than five. It wouldn’t be a big deal if the Blue House admitted the mistake for breaking the social distancing rules when citizens experience inconvenience in their daily lives. 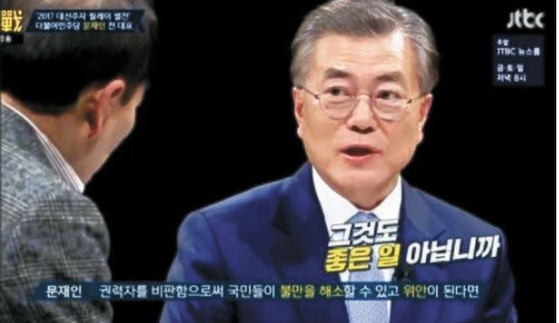 When asked if he can endure unacceptable criticism against him if elected president, Moon Jae-in said he can. [JTBC]

The controversy over the residence in Yangsan is similar. He should have said that farming land was included as security wards needed to be built and that he did not know the farming land law was that strict. The Blue House clarified that the residence was not for profit. But Moon’s former chief of staff went so far as to criticize critics for “being pathetic.” Even Moon wrote on Facebook, “Please stop. It’s tedious and so embarrassing.”

The problem comes from the sense of privilege that the president is different from civilians. While he acts as if he is an equal citizen, he thinks it’s okay to break the law, use expedient measures, and use state institutions for “acts of governing.” Maybe, he remains as a feudal monarch like a king of Joseon.

President Moon was often ambiguous on controversial issues rather than making a clear decision. In retrospect, the government decided to overcome the pandemic based on treatment and reinforced disease control rather than securing vaccines last year. That approach is being attacked my many in Korea.

Everyone makes mistakes and we need to fix it. However, as the president didn’t make a choice, there’s nothing to correct or apologize for. That’s why he easily tells people not to make the vaccine into a political issue and encourage anxiety.

Former German Chancellor Helmut Kohl was mocked for being heavy, being over 190 centimeters tall and slow in speech. A joke book was published about him being stupid. When a reporter asked if it was defamation, Kohl responded that it was leaking a national secret. It is luxury to expect such a humor from a Korean president yet.