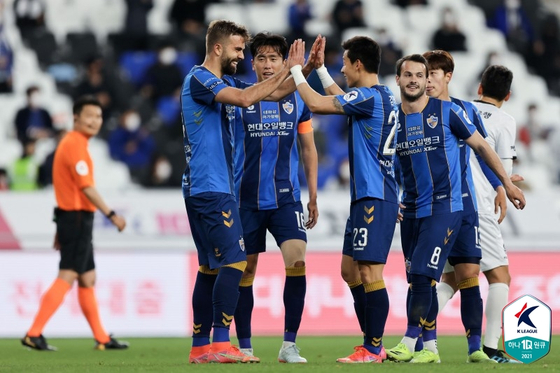 Ulsan Hyundai FC forward Lukas Hinterseer celebrates with his team after opening the scoring against Gwangju FC at the Ulsan Munsu Football Stadium in Ulsan on Saturday. [YONHAP]


Daegu FC, Ulsan Hyundai FC and Incheon United picked up the K League's only wins over the weekend, with the three other games once again ending in draws.

Daegu FC took its fourth win in a row on Saturday, beating Suwon FC 4-2 at the Suwon Sports Complex in Suwon, Gyeonggi.

Daegu, playing without ace forward Cesinha and defender Hong Jung-un, fell behind early, as Suwon opened the scoring with striker Yang Dong-hyun finding the back of the net 21 minutes into the game.

Daegu were offered a way back into the game in the 38th minute when Suwon's Park Ji-soo scored an own goal. Park has intended to clear a shot from Daegu’s Kim Jin-hyuk, but instead ended up heading the ball into the back of the net.

Daegu’s Edgar Bruno, Nishi Tsubasa and Lee Keun-ho added three more goals in the second half of the game, while Suwon's Lars Veldwijk was able to score the one consolation goal.


With the win, Daegu jumped up to fourth in the K League table while Suwon remain in last place.

Ulsan forward Lukas Hinterseer opened the scoring in the 20th minute for his first goal of the season, with Vako Kazaishvili adding another to cement the win. Ulsan had been struggling with a goal drought, having failed to score since April 11.

Ulsan holds on to second place whereas Gwangju goes down to eleventh on the table.

Incheon took away a 1-0 win against Gangwon FC at Incheon Football Stadium in Incheon on Sunday. It was Incheon midfielder Kim Do-hyuk who scored 57 minutes into the game.

The other six teams had to settle with a point each.

FC Seoul and Seongnam FC finished tied 2-2 at Seoul World Cup Stadium in western Seoul on Friday. The Seongnam team sits at seventh and Seoul sits at eighth on the table.

Jeonbuk Hyundai Motors also tied 1-1 with Jeju United at Jeonju World Cup Stadium in Jeonju, North Jeolla on Sunday, holding on to first place. Jeju are third on the table.