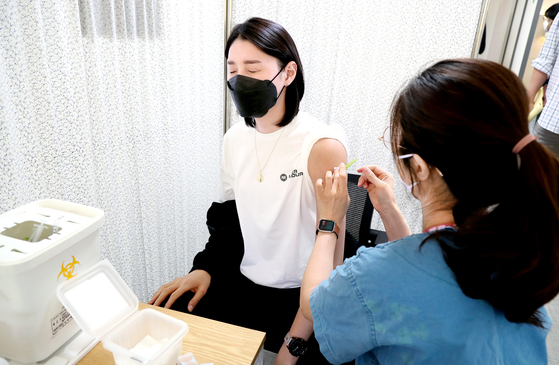 Volleyball star Kim Yeon-Koung gets her Pfizer jab on Thursday at the National Medical Center in central Seoul in preparation for the Tokyo Olympics. [YONHAP]


Korean Olympians younger than 18 may have to head to Tokyo without being vaccinated.

Athletes under the age of 18, like 17-year-old sports climber Seo Chae-hyun and 16-year-old table tennis player Shin Yu-bin, are not included in the 931 people who are being vaccinated in preparation for the Games.

Olympians have been receiving Pfizer jabs at the National Medical Center in central Seoul since April 29 ,with a total of 598 people currently vaccinated. As the first and second doses of Pfizer need to be taken three weeks apart, the second round of vaccinations will be completed later this month.

Even though the Ministry of Food and Drug Safety has authorized Pfizer shots for people aged 16 or over, people younger than 18 are not included in the government vaccination plan yet.

Athletes who will not be reach the age of 18 until July, like Shin and Seo, may not receive their shots before leaving for Tokyo.

The International Olympic Committee (IOC) recommends but does not require athletes to be vaccinated. However, athletes will still need to test negative twice within 96 hours before entering Japan to compete at the Games.