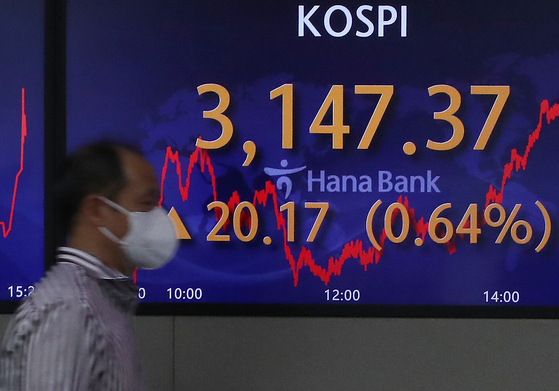 
Stocks rebounded on Tuesday, the second day of resumed short selling, after a five-session losing streak as institutions scooped up local stocks. The won rose against the dollar.

The Kospi traded choppy after a weak start, largely as inflation concerns and the partial resumption of short selling drove stock prices down.

Market heavyweights also came under selling pressure on the second day of the resumption of short selling after a 14-month ban.

"Among the short-sellable stocks, those with high valuation pressure that went through a steep increase in the amount of their securities lending showed a distinctive fall in their prices," said Korea Investment & Securities researcher Lee Na-ye.

The stock index turned to gains in the afternoon, buoyed by increased institutional buying.

Chemical and bio gains led the Kospi’s rebound, while insurance and transport slumped.

The local currency closed at 1,122.6 won to the dollar, down 1.4 won from the previous session's close.