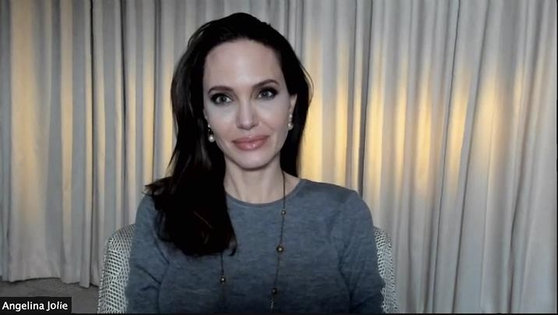 Angelina Jolie attends an online press event with the Korean media to promote her film ″Those Who Wish Me Dead″ on Tuesday. [WARNER BROS KOREA]


Angelina Jolie’s latest action thriller “Those Who Wish Me Dead,” which world premieres in Seoul Wednesday, has her portraying Hannah Faber, a veteran smoke jumper struggling with post-traumatic stress disorder (PTSD) and guilt due to her failure of saving three boys from fire.

She finds redemption in protecting a boy named Connor (played by Finn Little) who is on the run from two assassins.

At a press event after a screening at CGV Yongsan Tuesday, Jolie said she found solace in portraying a character fiercely protective towards the child.

“It was very therapeutic for me,” Jolie said. “Like everyone, we go through times in our lives where we feel overwhelmed and broken. I wasn’t feeling particularly strong coming into this.”

Scenes where Hannah and Connor tear through the mountain fire involved real fire instead of computer-generated (CG) images, which made the experience very vivid for the duo.

“The forest was controlled with gas that lit up the trees, so it was very real,” Little said. “You could really feel the heat of the fire. That put everything into perspective. That’s the amazing thing about the director Taylor Sheridan. He gives you the environment to work in to help. It was very amazing what happened on that shoot.” 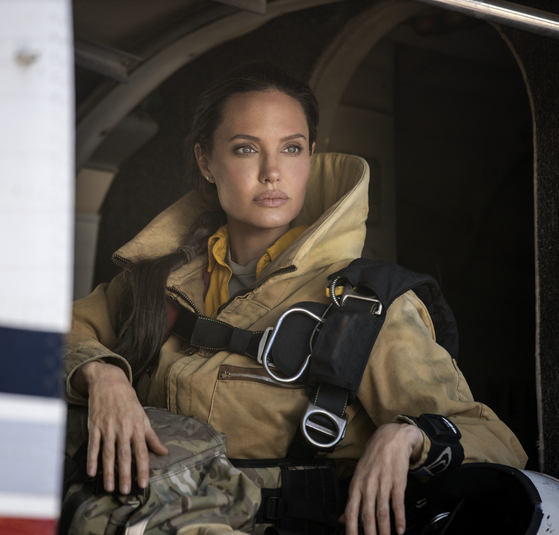 Angelina Jolie as a veteran smoke jumper risks her life to save a little boy in action thriller "Those Who Wish Me Dead." [WARNER BROS KOREA]


“In many movies, there’s a lot of CG, and as much as they can be wonderful, when you see real fire, I believe the audience can feel it so this film called for that,” Jolie said. “I think it makes a difference while watching it. It did make a difference for us. It made it very real.”

Although Hannah’s protectiveness toward Connor is centered on his survival, Jolie also related to the character in the sense that she is a mother to six children.

“Many times over my life has been enhanced and I’ve grown through my love for my children and my relationship to them. And so for me I loved that this character was so broken,” Jolie said. “What saves her is him, is that she finds a purpose in helping him get through and survive, and so I think that’s what parenting can often do. It takes you out of yourself. When you give for someone else, it gives you the strength you didn’t know you had.”

Connor instinctively realizes that Hannah is someone whom he can trust. When the Korea JoongAng Daily asked Jolie what it meant to trust someone, she answered that it was about whether or not she could count on the person to be honorable.

“We’ve all had times in our lives when we’ve been betrayed,” she said. “There are people who say that you can trust them, but their idea of right and wrong is very different from yours, and you can suffer great moral injury from someone you trust who does not value you or life in the same way. I think it’s as ‘Are you the same as me when it comes to what is morally right and wrong? Can I fully believe that you would stand up when the moment came?’ I think what it really comes down to is that I count on you to be an honorable person.”

She hopes that the film can provide the same healing effect on the audience as it did to her.

“We've all come out of a difficult year,” she said. “We’re still coming out of it, and I think this film is both entertaining and is a good thriller but I think also it is about people who feel overwhelmed, pushing through and overcoming together, and so I feel like in that spirit it will connect to everyone at this time.”

Angelina Jolie Those Who Wish Me Dead May 5

Help those in need