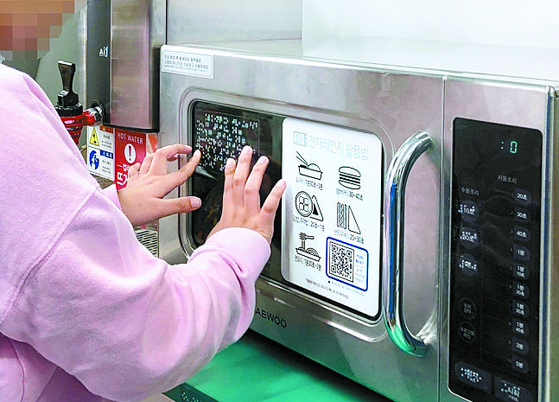 PARK HAE-LEE
The author is a political and international planning team reporter of the JoongAng Ilbo.

Braille, a tactile writing system for the visually impaired, is named after Louis Braille, a Frenchman who lost his sight and created a system of six raised dots arranged in two parallel rows.

When he was 12, he studied the 12-dot tactile military code invented by Capt. Charles Barbier. Borrowing the idea of using a combination of dots, Braille developed a system of six raised dots and published the first book using Braille in 1829.

He was 15 years old at the time and continued to refine and develop the system to express mathematical expressions and music as well, according to the book “Think like an Innovator” by Paul Sloane.

Braille is made of six raised dots in two columns with three positions. 64 combinations of six dots refer to a vowel, consonant or number. The index fingers of both hands are generally used. According to the Korean Braille Guideline, dots should be raised by 0.6 to 0.9 millimeters, be of a diameter of 1.5 to 1.6 millimeters and spaced 2.3 to 2.5 millimeters apart. Spacing between character depends on the material, but generally, it should be 5.0 millimeters apart vertically.

Braille written not according to the guidelines fails to function properly. Even when the writing is correct, there may be obstacles hindering the visually impaired from reading the Braille. The antibacterial film attached on elevator buttons to prevent the spread of Covid-19 is a notable example. As the thick film covers the surface, the visually impaired cannot feel the raised dots and experience serious inconvenience.

On April 29, the National Assembly passed a revision to the Braille Act. It was initially proposed by a student intern who was inspired by the case of a visually impaired person unable to press elevator buttons. In the revised bill, a clause was added that said the central and local governments as well as public agencies must identify and improve obstacles to using Braille. The obstacles we created without realizing need to be removed. The legislature did a good job this time.