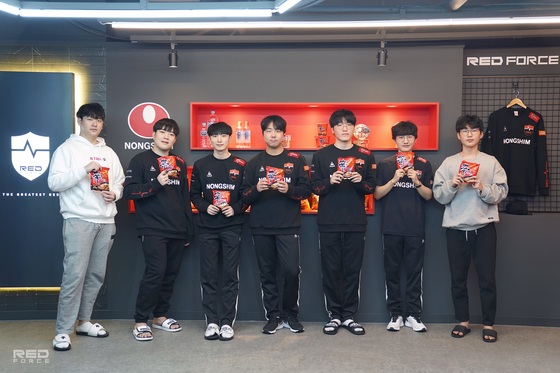 Members of Nongshim RedForce line up, each with a Shin Ramyun packet in hand, for a group photo at their training facilities. [NONGSHIM REDFORCE]


Nongshim didn't dip into esports franchising just to noodle around.

One way of doing that, it was decided, would be fielding their very own team in League of Legends Champions Korea.

LCK may be produced domestically, with most of its franchises funded by Korean corporations, but the league boasts an undoubtedly international reach. Its matches are watched by millions of viewers worldwide in more than a dozen languages: According to Riot Games Korea, 67.1 percent of the audience hailed from overseas last summer.

Nongshim RedForce started competing in the LCK this January.

The RedForce logo is directly inspired by Shin Ramyun's packaging design. The black-and-red color scheme is an exact match, and its main visual motif — the singular triangle wave meant to represent a heartbeat — was also lifted straight from the bottom left of the Shin Ramyun packet.

While the corporate-speak provided with the logo's reveal — "the heartbeat graph in our symbol signifies challenger spirit, passion, and flutter of hearts" — might be a bit strong, there's no denying that the branding is sleek and does a good job of evoking the ramyeon packet.

Before Nongshim took over, the organization was known as Team Dynamics.

Dynamics won promotion to the LCK last April, but the league was slated to transition to a permanent franchise system within the year. As the buy-in would be steep — 10 billion won ($8.98 million) — the team needed to find a sponsor or investor with deep pockets.

"Our priority was to partner with a stable parent corporation that shared and supported our vision of gradual, self-sufficient growth," Nongshim Esports president and CEO Oh Ji-hwan told the Korea JoongAng Daily at the team's headquarters in Gangnam, southern Seoul, on April 27.

Oh, who founded Team Dynamics in 2019 and spearheaded its operations leading up to the M&A, said that there had been several callers, but Nongshim had been by far "the best fit". 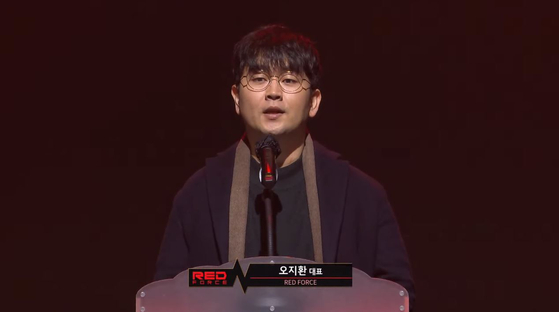 Nongshim Esports president and CEO Oh Ji-hwan gives a speech at the team's ribbon-cutting ceremony last December. Due to Covid-19 social distancing regulations, the event was broadcast without a live audience from the VSPN studio at Dongdaemun Digital Plaza in central Seoul. [SCREEN CAPTURE]

In Korea, food and beverage companies jumping into esports to earn favor with the younger generation is old news. Since as early as 2001, top F&B brands such as Coca-Cola, Pepsi, Hite, Snickers, Pringles, Bacchus, Nongshim, Ottogi, Orion and Lotte Chilsung have been making moves in the space.

The model example might be Lotte Chilsung's sustained marketing drive for HOT6, its caffeinated energy drink. In 2012, HOT6 sponsored the Global StarCraft II League to massive success, thanks to broadcasters and fans voluntarily adopting "Energy up, power up, HOT 6iX!" as the event's unofficial slogan-cum-kickoff chant.

It should be noted, however, that the vast majority of these campaigns, including Nongshim's previous forays — funding two Special Force Championships — were tournament sponsorships.

Only a few companies — Hite (Sparkyz, 2009), Chicken Maru (MVP, 2015), and Genesis BBQ (Olivers, 2017) — have tried out an alternative setup: Purchasing the naming rights of a specific team. Hy, formerly Korea Yakult, is also giving this model a try by partnering with Brion Sports Business Group.

The Hite, Chicken Maru and Genesis BBQ cases all ended up showing why placing bets on individual teams brings a higher risk.

A number of Sparkyz players were caught match-fixing the year after Hite got involved, MVP disbanded its SC2 team less than 12 months after the sponsorship deal was inked, and the Olivers were relegated to the second division within two years, then got mired in a variety of ugly off-the-Rift controversies.

Not the kind of attention their sponsors were looking for.

Within this context, Nongshim's decision to acquire and directly operate its own esports organization, as opposed to merely slapping their name on an external one, is unusual, but perhaps wise.

It is also most likely a first for a domestic F&B company, although Korean esports' glaring lack of a centralized archive makes this difficult to conclusively verify.

Many of Nongshim's competitors, such as T1, Gen.G, and Hanwha Life Esports, have designed and built a new headquarters going into the LCK's franchise era. There, dozens of staff work out of sleek, futuristic buildings designed to make it clear this sport is here to stay.

Nongshim, in contrast, were running everything from two rented floors of a relatively dated building. One story below their offices was Esports Academy Korea, the League of Legends coaching institution affiliated with RedForce, while other occupants of the building included a malt whisky bar and a basement billiards club.

Despite being part of a mammoth corporate group, RedForce do not operate on a blank-check budget. Counting out players and coaches, there are less than ten full-time employees and not too many duties are outsourced. Oh handles most PR inquiries himself, for instance.

To be clear: There have been no reports of Nongshim underpaying its staff or skimping on necessities, and all of the team's spaces and facilities look cozy and serviceable, if a little under-decorated compared to the competition.

Top laner Lee "Rich" Jae-won and coach Chae "Noblesse" Do-joon — who have previously been with Gen.G — also told the Korea JoongAng Daily that while Nongshim's facilities weren't too "eye-popping", neither of them had any complaints about their living and working environments. 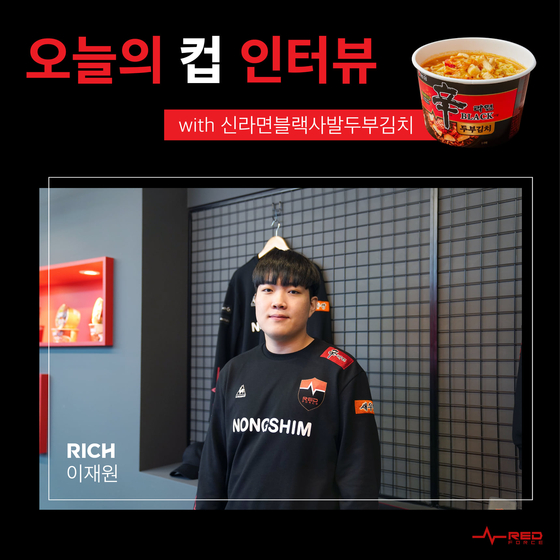 Top laner Lee ″Rich″ Jae-won, who has been with the organization since its Team Dynamics days, poses for a post-match ″cup-terview″. [NONGSHIM REDFORCE]


According to Oh, the relative frugality is by design.

His plan — which Nongshim is aligned with — is to follow the market's organic growth and expand the organization at a sustainable pace, as opposed to pumping in vast amounts of unearned capital for a head start. Through the process, Oh hopes to prove that Korean sports teams could, and arguably should, be operated as self-sufficient businesses.

"Simply relying on handouts from the parent group isn't how we want to do things," he said.

Most Korean sports teams run antithetical to Oh's philosophy. One leading example would be football team Jeonbuk Hyundai Motors FC, whose domestic record over the past decade is peerless.

"By sporting measures, [they're] a successful club, definitely," Oh admitted. "But it's difficult to call [the club] a valuable business, when the parent company [needs to] fund them with tens of billions of won annually."

Korean professional sports were never designed to be commercially viable. Most domestic leagues — including the oldest and most popular one, baseball — were created in the 1980s not as entrepreneurial ventures but with the intention of diverting public attention away from politics.

The military regime of those days may no longer exist, but the nonprofit model for sporting organizations does. It firmly remained the norm for teams to run at a financial loss, relying on parent chaebol to foot the bills and market the entire operation as a form of giving back to the community. Korean esports is also a part of this tradition — it's why the Brood War scene was able to support hundred-million-won salaries as early as 2002.

Oh, a football fanatic who briefly worked at Nike as a digital merchandiser before making the jump to esports, believes well-established Korean sports have come too far to radically change their ways now. But he thinks esports, still somewhat in its youth, can become the exception.

For those interested in how the esports sausage is made, Nongshim's nascent campaign to buck Korean professional sports' decades-old business model — or lack thereof — may be just as gripping to watch as their games on the Rift.

This season, many RedForce fans have posted questions such as "Will the company buy us a better mid laner if we start eating more Nongshim ramyeon?" on online forums, mostly in jest.

Nothing's that simple, but — maybe.

Currently, esports structurally differs in that its B2C avenue for teams is inherently weak, save for the very few clubs that have successfully established themselves as iconic fashion brands — such as the Los Angeles-based 100 Thieves, which specializes in streetwear.

Even T1 — which boasts a global army of fans large enough to dwarf all other Korean esports organizations' fan bases combined — has yet to find a truly significant B2C breakthrough.

In the vast majority of esports leagues, all teams are either made to compete remotely or at a fixed studio venue, as opposed to the home-and-away-stadiums format typical in most sports. There are no ticket sales, parking fees, vendor sales, etc., to be collected by individual organizations.

Moreover, esports' fundamental property of being an advertisement for a commercial video game means that a good number of fans tend to prioritize spending money on cosmetic skins or season passes for their personal accounts, over physical merchandise from teams.

It's also worth noting that the esports fan demographic is very young, with less disposable income compared to those of more traditional sports.

All these factors add up to explain why many organizations have recently been intensifying efforts to sign gaming influencers and streamers, many of whom are barely even esports-adjacent. Although things will most likely change in the future as the market grows, most fans at present are not being considered by teams as direct sources of actual revenue, but rather suppliers of brand value — views and engagements to be leveraged in media and advertisement sales.

So, going back to the ramyeon question: No really, maybe.

According to Oh, Nongshim sponsorships aren't automatically gifted to RedForce. Instead, Nongshim Esports staff "head to Nongshim HQ and make a legitimate sales case" for why one would make sense, just like they would pitch any other potential sponsor.

At present, RedForce sport two Nongshim product patches on their uniform: Shin Ramyun on their shoulder and Saewookkang on their left arm. There seems to be plenty of room for a few more. 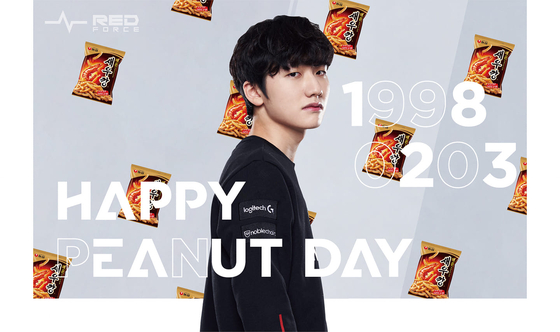 While the exact calculations behind Nongshim's decision to acquire Team Dynamics haven't been revealed, Oh said one thing was very clear to both him and the group: "No other sport is better than esports at reaching a young and global audience."

Nongshim has been running international operations for a long while — its Shanghai factory was built in 1996 and its Los Angeles factory in 2005 — but recent years have been bringing in particularly impressive growth.

Korea's recent rise in global cultural influence shows no signs of abating soon, and Nongshim will be happy to keep on riding the wave. Even without marketing miracles like Chapaguri — a popular blend of Chapaghetti and Neoguri, both Nongshim-made noodles — prominently featuring in Parasite (2019), the company's international stature in the instant noodle market is projected to continue growing for some time.

For now, RedForce aren't dedicating too many resources to overseas marketing, as both Nongshim and Oh believe that stabilizing domestic operations and building a strong connection with the local market should come first.

The organization has already been fielding inquiries from foreign fans, however, mostly thanks to the presence of marquee signing Han "Peanut" Wang-ho — an international celebrity with several fan clubs in China alone. Some requests, such as the addition of an English page to the team's online goods shop, have now been fulfilled. Others may take a bit more time.