[Video] A real look at Staria, a spaceship from Seoul

[Video] A real look at Staria, a spaceship from Seoul

The most fascinating feature of the Staria, Hyundai Motor’s latest interpretation of a minivan, is its exterior design.

Of course, there have been many other upgrades, but noting beats how radical of a design transformation this car went through on the outside.

The Korea JoongAng Daily recently got a chance to see the vehicle in real life and ride in the back seat of it and were actually surprised at how it exactly resembled the photos that many people thought were of a concept car.

We were allotted with a seven-seater Staria Lounge which is a premium version of the basic Staria.

Hands down, the exterior design was top-notch. The minimalistic curves and lines gave the vehicle a spaceship-like appearance. Exterior design-wise, I think this van is the nearest it can get to what we imagine a future mobility would look like.

The slim horizontal LED headlamp that crosses the hood plays a decisive role in forming the look, making it seem like the vehicle is wearing Matrix-inspired sunglasses. The cube-shaped turn signals underneath, comprised of four squares on each side, add to the futuristic demeanor. The frameless mesh grille blends in with the rest of the frontal look to add to the sleek vibe.

Inside, the vehicle instantly feels spacious thanks to these large windows on the side and also on the top.

Motivated by what Hyundai Motor calls an "Inside Out" concept, the line of the windows has been significantly lowered, contributing to the panoramic frontal view. Even riding in the back seat, the near-panoramic view and the two windows on the top create a wide and open view, making a two-hour trip ever more enjoyable.

We've got a chance to sit in the driver's seat at the turning point and what was surprising to me was that how digitally upgraded this Staria was compared to the Starex, a now suspended model from Hyundai Motor.

A minivan, especially the Starex, usually accompanied an unsophisticated image, but this vehicle came with a pretty high-tech 10.25-inch digital cluster behind the steering wheel and another 10.25-inch infotainment screen in the center which comes together with the air conditioner buttons and other ventilation options underneath. 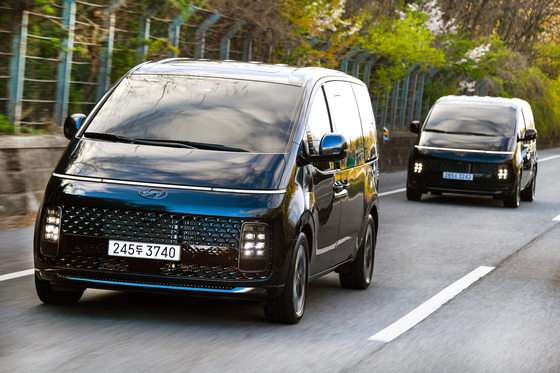 
One thing that falls short of expectations is the surprisingly analogue and stiff window in the back seat, which took a bit of work to get open. The plastic handle also didn't go in line with the sophisticated look the Staria is going for.

The second-row doors can be opened automatically with a button on the ceiling from the front-row.

What we had was a seven-seater, but the nine-seater Staria Lounge has an additional function called Swiveling Seats where the second-row seats can be swiveled 180 degree to face the third-row passengers. If going backward doesn't give you car sickness and local laws allow it, traveling this way could make communication within the vehicle much easier.

Hyundai Motor also gave a sneak peek into its yet-to-launch Staria Limousine, which has a high roof and a moving center console, something we've seen in the Ioniq 5, for a more convenient in-car travel experience.

The carmaker also plans to release a fuel cell electric version of the Staria in the latter half of 2023, followed by a hybrid model as well.

The Staria definitely offers a lot more than just getting lots of stuff from point A to B. The model will definitely appeal to family unit customers who have more than two children or who like traveling and camping domestically, which is increasingly gaining popularity. Living up to such expectations, the Staria already garnered more than 10,000 preorders on its first day.

A Staria is born