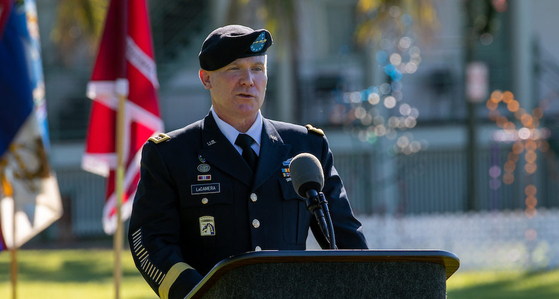 
The nomination of U.S. Army Pacific Commander Gen. Paul LaCamera as the next commander of the U.S. Forces Korea (USFK) was sent to the U.S. Congress on April 27, according to multiple Korean government sources on Wednesday.

If confirmed, LaCamera will take up his new post in Korea next month.

LaCamera was originally nominated to the post in December by then-U.S. President Donald Trump to succeed Gen. Robert Abrams to lead the 28,500 American troops in South Korea.

Although the nomination was referred to the Senate Armed Services Committee for a confirmation hearing on Dec. 2, it was returned to the White House under the standing rules of the Senate, which stipulate that nominations neither confirmed nor rejected during the session during which they were made cannot proceed without being forwarded again to the next Senate by the president.

Should his nomination be confirmed this time, LaCamera is due to take up his post next month, aheof the start of the U.S.-Korea joint military exercises in August.

The holder of the post of USFK commander also heads the United Nations Command, which oversees the armistice that ended the 1950-53 Korean War between the South and North.

A bilateral agreement signed between South Korea and the United States in 1978 also gives the USFK commander operational control of allied forces on the peninsula in wartime — a combined force that includes South Korea’s approximately 600,000 active duty troops as well as the 28,500-strong USFK.

Abrams has headed the USFK and UN Command since his confirmation in October 2018. USFK commanders typically serve in their posts between two to three years.

A graduate of the U.S. Military Academy at West Point, 57-year-old LaCamera was made commander of the U.S. Army Pacific in November 2019.

The U.S. Army Pacific also oversees the manning, training and equipping of the USFK, though the latter has operational control of allied forces in Korea in a contingency.

Former USFK Commander Gen. Vincent Brooks, the immediate predecessor of the current Commander Gen. Robert Abrams, also served as head of the U.S. Army Pacific before being tapped to lead the USFK.

The Korea-U.S. Alliance Foundation is scheduled to hold an online farewell party for Abrams on May 13.