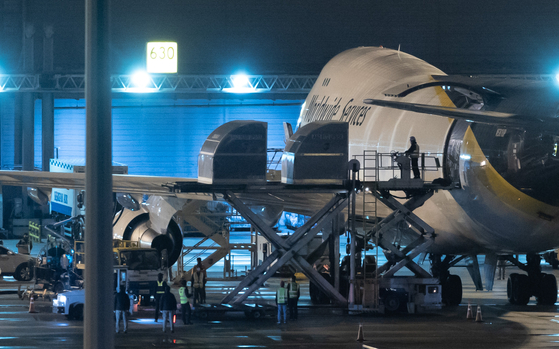 Officials unload containers carrying 436,000 doses of Pfizer Covid-19 vaccines from a UPS cargo plane that landed at Incheon International Airport on Wednesday. New batches of Pfizer vaccines have been delivered in Korea every week since April, and a total of 7 million Pfizer doses are to be introduced in the first half of the year. [NEWS1]

According to Shinsegae, one of its cashiers developed symptoms of Covid-19 on the afternoon of May 1, and was confirmed positive two days later.

Since then, the department store made around 60 people — employees and people they were in contact with — take coronavirus tests, and found on May 4 that one more cashier had been infected. The company announced that it replaced all cashiers in the food hall with new staff to prevent any further spread.

However, it was not until Seocho District sent out an emergency text message on Wednesday morning that Shinsaegae announced the cases.

Two valet car parkers in charge of VIP customers at the same store, Shinsegae Department Store's Gangnam branch, also were confirmed with Covid-19 on April 30. It was reported that nearly 900 VIP customers visited the  store while the first confirmed employee was parking cars.

Another cluster was reported in Lotte Department Store's main branch in Jung District, central Seoul, where nine employees working in the food hall on the basement level were confirmed. The first patient was confirmed on May 1.

Health authorities sent emergency texts throughout the metropolitan area, asking anyone who visited the supermarket on the basement level from April 25 to May 2 to take Covid-19 tests.

Lotte Department Store later announced that it would close the food hall from Tuesday, May 4 to Thursday, May 6.

Clusters at department stores are tricky as visitors enter without having to register with a QR-code or on a handwritten entry log, as in movie theaters and many restaurants.

Food halls, which are located in department store basements, are particularly vulnerable to virus transmission as they are more crowded than other floors, ventilation is weak and customers do not have masks on if they are eating.

Health authorities, however, maintain that department stores are not much of a problem.

"We believe that department stores have a relatively low risk of infection compared to other multi-use facilities," said Yoon Tae-ho, a senior Health Ministry official, in a regular briefing Wednesday.

"So far, there haven't been cases of mass infections caused by customers at department stores ... there were more confirmed cases of workers than customers," he said.

"It is also very important that customers wear masks and follow the basic rules," Yoon added.

As clusters of infections continue to pop up nationwide, Ulsan advised all employees at a wide range of businesses to take Covid-19 tests from Wednesday, as the southeastern city struggles with an alarming number of virus variants.

Health authorities tested samples of 80 Covid-19 patients in Ulsan between March and the second week of April, and found the British variant in 51 samples, or 63.8 percent of the total. That was far higher than the virus variant rate nationwide during the past week, which was 14.8 percent.

An average of 40.4 patients a day have been reported in Ulsan over the past one week following a series of infections tied to schools, hospitals, public institutions and gatherings.

The spread of the British variant, which is known to spread 1.7 times faster, has boosted concerns.

As a result, the municipal government extended social distancing Level 2 until May 16, and reduced the business hours of restaurants, cafes and entertainment facilities by one hour from 10 p.m. to 9 p.m.

Meanwhile, a total 3,530,014 people, or 6.8 percent of Korea's population, have received one dose of a Covid-19 vaccine since the country started its vaccination campaign on Feb. 26.

Starting Wednesday, fully vaccinated people will be exempted from the mandatory 14-day quarantine after entering from abroad or coming in contact with a Covid-19 patient. 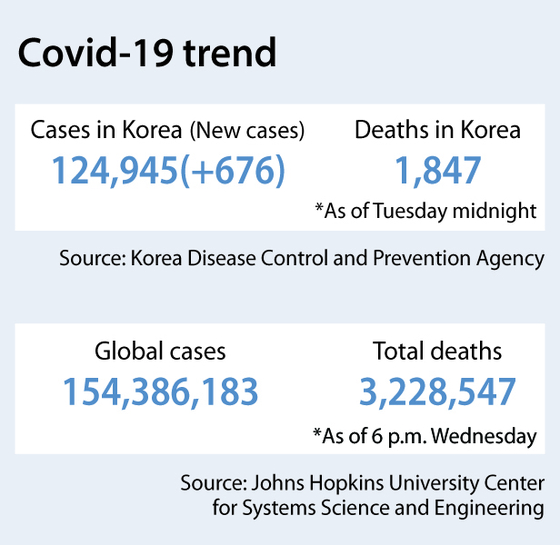 Starting Thursday, authorities will start taking reservations for AstraZeneca vaccinations from people between the ages of 70 and 74, and people suffering from chronic respiratory diseases.

This summer's hottest destination may be the mall

Department stores target the young and the rich