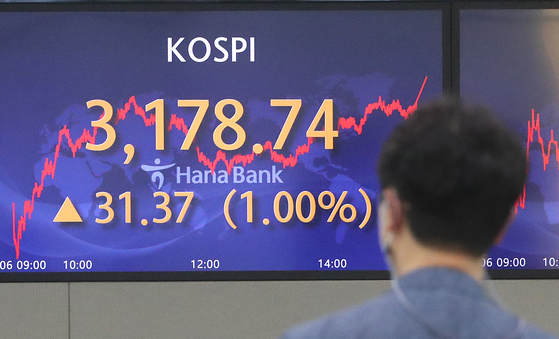 
Stocks advanced Thursday as hopes for a global economic rebound offset inflation worries. The won fell against the dollar.

The Kospi got off to a weak start, tracking the overnight U.S. tech decline from the quicker-than-expected inflation.

Tech shares retreated in Seoul amid foreign selling and following U.S. Treasury Secretary Janet Yellen's comment that interest rates may have to rise to prevent the economy from overheating.

The stock index gained ground, however, as institutions scooped up stock on speculation that the fast global recovery would spur the local exporters' earnings.

"The impact of the inflation worries seems to have eventually diminished," he said.

The local currency closed at 1,125.8 won against the U.S. dollar, up 3.2 won from the previous session's close.