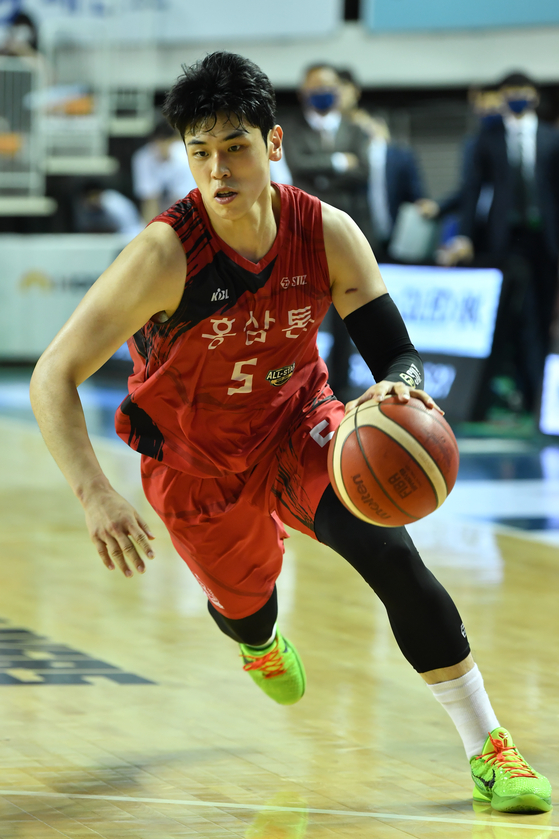 Byeon Joon-hyeong of Anyang KGC dribbles the ball in the second game of the KBL championship series at Jeonju Gymnasium in Jeonju on Wednedsday. [KBL]


Anyang KGC won the first two matches of the best-of-seven Korean Basketball League championship series against the Jeonju KCC Egis, setting themselves up to sweep the 2020-2021 regular season winners.

This season's champion will be the first to be crowned in two years as the KBL decided last March to cancel the remainder of the regular season and the playoffs, due to safety concerns. Wonju DB Promy and Seoul SK Knights, both winning 28 games out of the 43 regular season games, topped the table for the shortened season.


This regular season, all 10 teams played 54 games, with the top six teams advancing to the postseason.

Coming third in the regular season, Anyang had to battle through two rounds of playoffs to make it to the championship. Anyang won the first round against the sixth-place Busan KT Sonicboom, advancing to the semifinals to beat the fifth-place Ulsan Hyundai Mobis Phoebus.

As No. 1, Jeonju advanced straight to the semifinals and beat the Incheon Electroland Elephants, advancing to the championship.

Despite topping the regular season table, the Jeonju side lost the first two games at Jeonju Gymnasium in Jeonju on Monday and Wednesday.


The Jeonju team will be desperate for a win in the third match, to set the stage for a counterattack.

The star player of Wednesday's game was Anyang's Byeon Joon-hyeong, scoring 23 of the 77 points for the team. Byeon shot five three-pointers during the game, and helped lock in the win with an assist in the last 24 seconds when they were just one point ahead.

During the regular season, Jeonju beat the Anyang side with four games to two. If Jeonju manages to pull off the same kind of win with a big comeback, they will sweep both the regular season and the postseason championship.

The third match will take place at Anyang Gymnasium in Gyeonggi on Friday at 7 p.m.