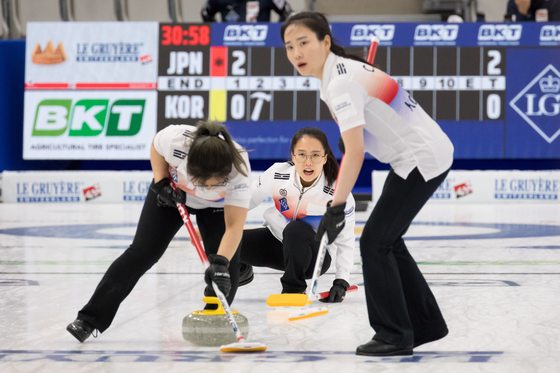 
Team Kim picked up their fourth win at the 2021 Women's World Curling Championship against Japan on Wednesday.

Despite entering the tournament as the second-highest ranked team, Korea got off to an inauspicious start at the Women's World Curling Championship, dropping their first four matches against Switzerland, Russia, United States and Germany.

Team Kim were able to pull off two wins on the sheet on Sunday, against Team Muirhead of Scotland 8-4 and Team Constantini of Italy with a big comeback, gaining two points at the very last tenth end to finish at 7-6.

Team Kim lost to Team Einarson of Canada on Monday. The host country was on a four-game losing skid until their 8-4 win against Korea.

Team Kim managed to add their third win on Tuesday against Team Turmann of Estonia 8-6, pulling themselves up to eight place.

On Wednesday, Team Kim added one win and one loss. Having lost 6-4 against Team Dupont of Denmark in the morning, Team Kim came back on the sheet in the afternoon to win 9-8 over Team Yoshimura of Japan.

Tied at 8-8 in the 10th end, the game went into overtime. At the 11th end, skip Kim Eun-jung scored the winning point, pushing away Team Yoshimura’s stone and landing Korea’s right in the middle.

At four wins and six losses, Team Kim stays 10th on the table.

The top six teams from the World Curling Championships will skip the preliminary rounds at the 2022 Beijing Olympics.

Team Kim faces a herculean climb as they must win all three remaining games against China and Sweden on Thursday and the Czech Republic on Friday to have a chance at earning an easy path to the Olympics.