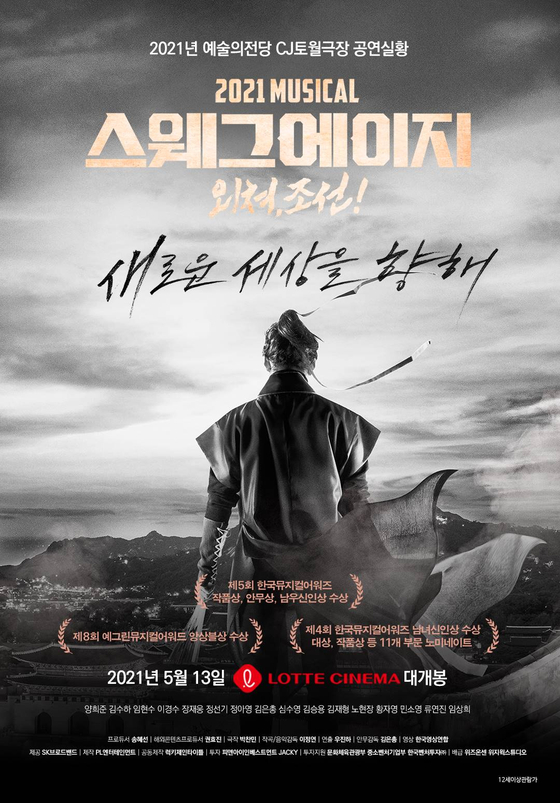 A poster for the upcoming film of the musical ″Swag Age: Singing Joseon!″ which will hit Lotte Cinema branches across the country on May 13. [LOTTE CINEMA]


Musical “Swag Age: Singing Joseon!” will be screened at 28 Lotte Cinema branches from May 13.

Lotte Cinema announced Friday that it has decided to screen the musical that won three awards at this year’s 5th Korea Musical Awards including for Best Musical Award.

The work is set in a fictional Joseon Dynasty (1392-1910), which calls for Zijo as the national ideology. The Korean original musical, directed by Woo Jin-ha with screenplay by Park Chang-min, premiered in 2019. The musical is recognized for its balance between traditional and modern elements, especially the reinterpretation of traditional Korean rhythms to the tunes of contemporary music. The musical also showcases various genres of dance ranging from hip-hop to traditional Korean dance.

The musical features Yang Hee-jun and Kim Soo-ha as the two leading characters.

The musical producers said the film version will not merely be a screening of the musical on stage. It has been specially filmed using more than a dozen cameras at different angles and edited professionally.

Niel of Teen Top to make big-screen debut next month