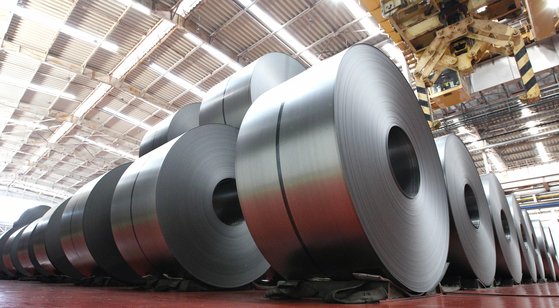 Prices of raw materials like iron ore, steel and copper have been surging, posing fresh challenges to Korean companies hoping for a rebound from the pandemic, particularly construction companies and shipbuilders.

The price of iron ore, the key ingredient for steelmaking, reached an all-time high of $201.88 per ton as of May 6 at the Port of Qingdao, according to data from the Ministry of Trade, Industry and Energy. It’s the first time the price has surpassed $200-mark per ton.

Optimism about a global rebound from the pandemic has boosted demand for metals used in construction and manufacturing, which has sent prices soaring.

The price of thick steel plates — which are used to make ships — is around 1.1 million won per ton, the first time the price has exceeded the 1 million won-mark since 2011.

Construction companies are taking a hit from a surge in prices of steel bars.

Makers of goods from cars to home appliance are being affected.

Normally, a mid- to large-sized car that weighs 1.7 tons to 2 tons consists of 1 ton of steels. Of the price of a new car, the cost of raw materials account for some 30 percent.

Carmakers are already suffering from a shortage of microprocessors for automobiles. Now they're worrying about having to raise sticker prices because of the cost of raw materials.

"Not only the price of steels, prices of other materials like tires have been soaring as well," said Lee Hang-gu, a senior analyst at Korea Automotive Technology Institute, during a seminar at the federation of Korean Industries in Yeouido, western Seoul on April 28. "Starting from vehicles that would be newly released in November, prices could be increased."

Copper traded at an all-time high of $10,361 per ton on the London Metal Exchange as of May 7, up some 31 percent compared to the beginning of the year. Copper is a key material for many industries including building construction, electronic products, transportation equipment and home appliances.

And the price of copper is expected to increase further, analysts say.

Singapore-based Trafigura, one of the world’s largest trading company, predicted that the price of copper is likely to increase as high as $15,000 per ton within a decade.