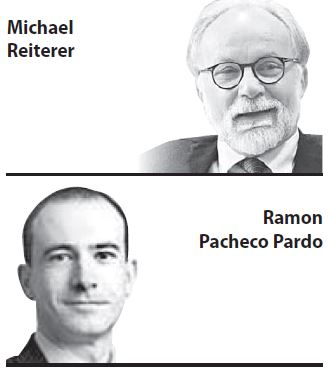 Michael Reiterer, Ramon Pacheco Pardo
Michael Reiterer is distinguished professor at the Centre for Security, Diplomacy and Strategy (CSDS) of the Brussels School of Governance. He is the editor of the CSDS policy brief series. Ramon Pacheco Pardo is the KF-VUB Korea chair and an associate professor at the Brussels School of Governance and Reader (Associate Professor) in International Relations at King’s College London.

The Indo-Pacific has moved into the centre of attention — not only in Asia but also in Europe. This region turns more and more into the theatre for the great power competition between the U.S. and China. It is also expected to become the economic growth engine for the post-Covid-19 recovery, introducing yet another strong element of competition.

In order to make this socio-economic global recovery green and sustainable in the interest of the people, international cooperation not exclusion or isolation are necessary. The outline of an Indo-Pacific Strategy agreed by the foreign ministers of the European Union in April highlights the core elements of a comprehensive policy to contribute to mastering tensions and challenges associated with geopolitical rivalry — contested islands and territories, competing trade agreements, competing systems of governance to name just a few.

Both Korea and the EU, irrespective of their geographical position, have a stake in the Indo-Pacific and its security as both depend on secure trade routes. Furthermore, counter-terrorism, cyber-security, maritime security proves that security has become indivisible — each region has a stake in the security of the other. In response, the EU intends to intensify the engagement of the Member States to contribute to maintain open and secure lanes in the region while in turn inviting partners to participate in its military-civilian missions. Korea has already concluded the Crisis Management Participation Agreement with the EU to this end which allows its participation in the anti-piracy operation off the coast of Somalia. Korea has also agreed that cooperation in the areas of nuclear non-proliferation and disarmament; cybersecurity; space policy and technology; preventive diplomacy and crisis management fit well into this line-up. Thus, Korea and the EU have the necessary framework to boost cooperation in the Indo-Pacific.

In recognition of the need to tackle global challenges, the EU suggests a broad and open cooperation in important areas like climate change, health and fighting the pandemic, ocean governance including fisheries. New methods need to be developed through joint research and technology to face the fourth industrial revolution. The EU’s approach is open and inclusive, making use of multilateral fora and strengthening regional cooperation and organizations, such as Asean. The EU and Korea share a similar approach based on the principle of inclusiveness.

Comprehensive Connectivity is a key concept, not limited to physical infrastructure but also including people-to-people exchanges. Connectivity could become the common denominator as all Indo-Pacific concepts or strategies published so far include connectivity in some form.

For Korea, the New Southern and Northern Cooperation policies fulfil this function. Japan spearheaded the open Indo-Pacific concept, later adopted also by the U.S. Linking up with the Belt and Road Initiative would assuage Chinese concerns about containment and facilitate a wide participation, including Korea. This could contribute to the stability, security, prosperity and sustainable development of the Indo-Pacific.

But connectivity also needs freedom of movement of persons, to be re-established after the Covid-crises. Freedom of movement of goods is necessary to maintain production lines and the international division of labour which has produced prosperity which should not be put at risk.

Trade and investment merit a special mentioning. The EU — one of the main trading and investment partners for all countries in the region — has concluded or is in the process of negotiating economic agreements with many Indo-Pacific countries. These agreements make the EU a preferential partner for countries in the region. A reformed WTO will remain the centerpiece of a fair multilateral trading system, providing the necessary rules and regulations for regional agreements to function.

Thus, given the importance of the Indo-Pacific, every stakeholder also has to shoulder a part of the responsibility to assure that this region contributes to global peace and prosperity. The Indo-Pacific Strategy which should be finished by September after thorough discussion also with partners — the EU has five strategic partners (Korea, China, Japan, India, Asean) in the Indo-Pacific — is the answer and the offer of the European Union.

Why a strategy? After reflection, a strategy defines goals and assigns instruments to meet them. As means are finite, there is need to prioritize. In the case of the EU, strategies adopted by consensus also get all 27 Member States on board and in line.

The EU is focused on the planning and certainly also on the future implementation of the Strategy — on its principles and values, like the rule of law, human rights and international law. These are important elements for multilateral cooperation to build a stable and open regional governance system, a trait which allows many to engage — especially a like-minded partner like Korea. The Indo-Pacific Strategy offers Korea a cooperative policy option to seize. An open, interest-based cooperation which is multidirectional and functional is in the interest of partners. Especially across East Asia, where hedging is the preferred foreign policy option and where one has to avoid falling into the trap of geo-political zero-sum thinking.

The origin of K-strategy (KOR)