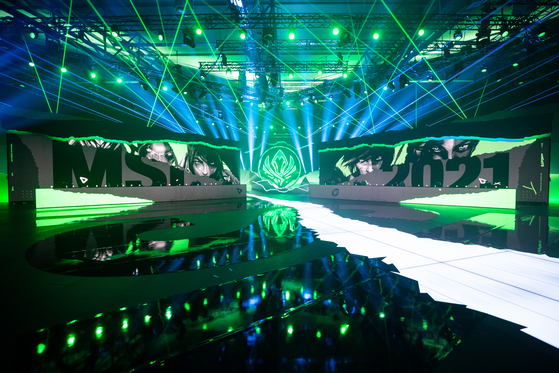 
To no one's surprise, DWG KIA are cruising through the group stage of the 2021 Mid-Season Invitational — but have definitely broken a sweat in the process.

The first few days of the tournament have make it clear that Group C's DWG KIA of Korea and Group A's Royal Never Give Up of China are a cut above the rest of the field, as was expected prior to the event. The other nine teams who have gathered to compete in Reykjavik are also regional champions, however, and showed that they have what it takes to at least threaten the titans on a good day.

DWG KIA kicked off the tournament last Thursday against North America's Cloud9, raising some eyebrows during the draft phase by handing Jang "Ghost" Yong-jun a not-exactly-meta Jhin. Whether the first-pick Morgana for Kim "Canyon" Gun-bu would be exploitable was also a big talking point.

C9 scored some points in the early game with a few skirmishes going in their favor, but Kim "Khan" Dong-ha soon took control over the match. Khan almost single-handedly led his team to victory by firmly securing top lane dominance, spreading it over the map via smart side lane play, then repeatedly pulling off perfect flanks and engages.

On the broadcast interview after the game, Heo "ShowMaker" Su gave kudos to his top laner, saying that his team "absolutely would have lost had the two top laners been [swapped]". Regarding his own play, the mid laner was less complimentary, saying that he wasn't satisfied with his skillshot accuracy.

International viewers picked up on the fact that DWG KIA's showing against C9 was reminiscent of the old SK Telecom T1 pattern of play at international events — get off to a seemingly slow start, but then suddenly switch gears at a certain point in the midgame to devastatingly steamroll to a win.

DWG KIA's following match against Latin America's Gillette Infinity the next day was a much less contested affair, with the reigning world champions essentially securing a win well before the turret plates came off; at 11 minutes in, the global gold difference was 3k in DWG KIA's favor. The one-sided display, as well as RNG's methodical stomps in Group A, led some to suggest that teams from non-major regions should have been filtered through a preliminary qualifier.

Such detractors were silenced on Day 3, however, when DWG KIA were pushed to the brink by DetonatioN FocusMe. The scrappy Japanese squad defied all expectations from the get-go, grabbing an early lead through smart invades then effortlessly snowballing their advantage all the way to soul point.

Khan, in particular, had no answer to top laner Murase "Evi" Shunsuke and jungler Mun "Steal" Geon-yeong, who repeatedly teamed up to make the three-time MSI veteran's game a living nightmare.

DFM stayed in the driver's seat for most of the match, taking down two inhibitors and three Barons in the process. Had it not been for a pixel-perfect Black Shield from Canyon and heroic peels from Jo "BeryL" Gun-hee stalling the onslaught, the game would have ended much earlier. Yet DWG KIA held on by their nails — and at 38 minutes in, succeeded in decisively winning a teamfight to claim a comeback victory.

After the match, BeryL admitted to being impressed with the opposition's quality of play, and said that in the return match, his team would need to provide Khan more support in the laning phase to counteract "[DFM's] win condition of getting [Evi] ahead".

DWG KIA have three remaining matches in the group stage, and will play all of them across a single broadcast day, from Tuesday 10 p.m. onwards. While the team is already very likely to move on to the next stage of the tournament, the games should still serve as a welcome update on their form.