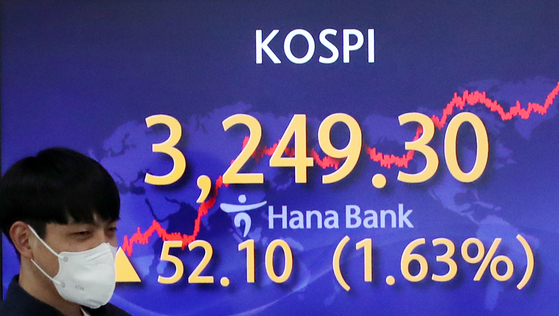 A screen in Hana Bank's trading room in central Seoul shows the Kospi closing at 3,249.30 points on Monday, up 52.10 points, or 1.63 percent, from the previous trading day. [YONHAP]

Stocks hit an all-time high Monday as weaker-than-expected U.S. jobs data quelled concerns over the rollback of easy monetary policy and other stimulus measures. The won rose against the dollar.

The Kospi got off to a solid start after extending its winning streak to a third session and expanded its gains amid strong foreign and institutional buying.

“Although concerns regarding higher interest rates aren’t entirely wiped, the stock market will continue to surge,” said Lee Eun-taek, a strategist at KB Securities. “The job market is sluggish, but optimism for stocks is high.”

The data vented much of the market worries stoked by U.S. Treasury Secretary Janet Yellen's comment that interest rates may have to rise to prevent the economy from overheating.

The U.S. government's push for big spending also fueled market beliefs that it would not consider tapering anytime soon.

The local currency closed at 1,113.8 won against the dollar, down 7.5 won from the previous session's close.