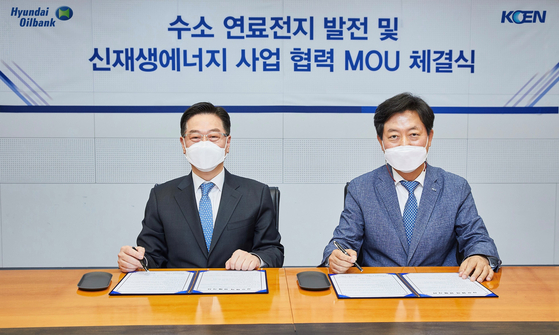 The date when Hyundai Oilbank will start supplying electricity hasn’t been decided.

Hyundai Oilbank, a local refiner, announced Monday it signed a memorandum of understanding with KOEN to jointly develop renewable energy.

KOEN is a power generation company that runs five plants nationwide. It supplies around 10 percent of domestic electricity.

The two companies plan joint development of renewable energy using hydrogen fuel cells through the establishment of a joint venture.

The companies expect to follow the renewable energy portfolio standard, which requires power companies with generation capacity of more than 500 megawatts to have renewable sources like solar and wind account for a designated portion of their portfolio.

Hyundai Oilbank will be supplying hydrogen while KOEN will contribute its know-how on the operation of a fuel cell plant.

The electricity produced will be supplied to customers like Korea Electric Power Corporation (KEPCO), which will be required by the government to purchase electricity generated from hydrogen fuel cells starting next year.

The government is making it compulsory for electricity providers like KEPCO to purchase electricity generated from hydrogen fuel cells as part of the goal to promote hydrogen-based energy.

The market for electricity generated using hydrogen fuel cells will expand to 8 gigawatts by 2040, up more than 12-fold from 650 megawatts now, according to the government. The market value is projected to reach around 7 trillion won ($6.25 billion) by 2040.

“Through the memorandum of understanding, the two companies plan on cooperating on various businesses in the field of renewable energy,” said a spokesperson for Hyundai Oilbank in a statement.

Not the only answer (KOR)