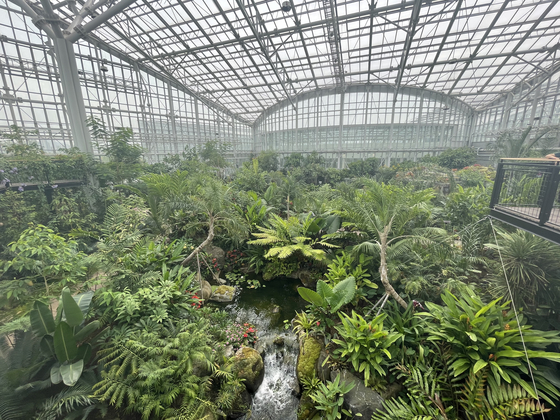 
SEJONG — Different from Korea's other two national arboretums, the newest Sejong National Arboretum is very easy to visit, thanks to its location in the heart of Sejong, the administrative capital of the country that offers a variety of public transportation options.

Although it lacks layers of trees, which the other two arboretums located in the countryside have, it has the largest greenhouse in Korea on top of a huge open space for visitors to leisurely stroll around. The arboretum measures 65 hectares or about 90 soccer fields put together and is divided into 24 different themes, such as traditional Korean gardens or areas where amphibians live.

“We seek to be the place to visit for those looking for a quick yet relaxing respite from their city life,” said Cho Nam-seong, director of Sejong National Arboretum’s administration department.

“What we pursue to make here, located so close to the city, is a harmonious communal space that intersects the ranges the nature and humans cover.”

Some of the arboretum's themes that exemplify the interaction between nature and humans are the Korean Traditional Garden as well as the Bonsai Garden.

The Korean Traditional Garden brings together popular gardens from across Korea. It includes replicas of Changdeok Palace’s garden in Seoul and Soswaewon in South Jeolla’s Damyang, both from Joseon Dynasty (1392-1910), to offer those visiting Sejong a chance to look at traditional Korean gardens found at hanok, or traditional Korean-style houses. The idea originally came because Sejong is the country’s administrative capital and many foreign delegates visiting the region may want to spare a couple of hours to see what Korean culture has to offer.

Since the arboretum is only a few months old after opening in January, for now the appearance of the replica buildings with young trees is a little different from what you see in person in Seoul or Damyang but they are still some of the most popular places for visitors to check out. 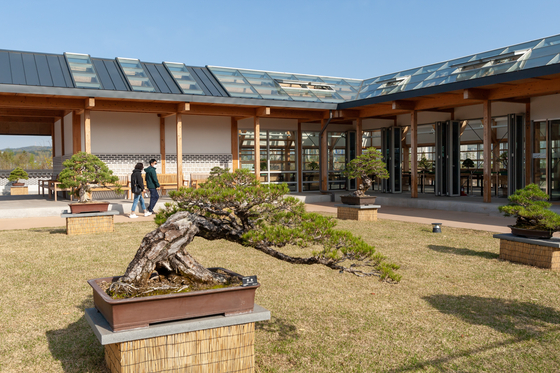 
The Bonsai Garden comprises of donations of different styles of bonsai and what is on display is regularly changed. The official said although bonsai is known to have been much more developed in Japan, Korea has also its own style of bunjae, cultivating small trees in a pot with curves, and it is in the process of studying and developing the Korean style further. At the garden, it asks people to squat down a little bit to take a look at the small bonsai trees from a lower viewpoint to take in the details of the trees' shapes.

If you're interested in exotic plants, head to the Four Seasons Exhibition Greenhouse, the largest greenhouse in the country. Colorful plants found in tropical climates create a jungle-like atmosphere. There are more than 400 different species on display. As well as small waterfalls, there is also a deck so that visitors can enjoy an aerial view of the tropical greenhouse whose ceiling is 32 meters high. The tallest tree in the greenhouse is from Indonesia and can grow up to 32 meters tall. Bananas and papayas dangle from the trees, adding to the lushness. 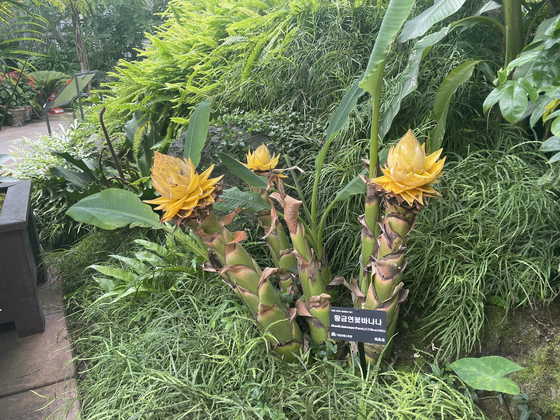 
Another greenhouse is home to plants that grow well in milder weather like areas around the Mediterranean. The arboretum has made a garden that looks like the one at Spain’s Alhambra palace, with the same plants and flowers planted symmetrically along both sides of a pond. From there, visitors can take an elevator to see a view of the arboretum outside of the greenhouse.

Because the greenhouses are considered indoor facilities, prior reservations are required to visit. Currently 300 people are permitted to enter every hour, but that number may change depending on government guidelines on the pandemic. If all of the spots are not filled by reservations, it is possible to get a ticket on the spot.

Right outside the greenhouse is a waterway that is a tributary of the Geum River. Different colored irises, which have been chosen as the representative flower of the arboretum, have been planted on both sides of the waterway.

The arboretum also distributes some of its perennial plants and flowers to those who want them. To keep the greenhouses filled with seasonal flowers, the arboretum replants its spaces four times a year. Because many of the plants that are replaced can live for years, like the winter season’s poinsettia, the arboretum gives away the plants with some tips on how to grow them at home.

Due to its proximity to Sejong and other neighboring cities, it also runs a yearly membership for those who want to visit more frequently. The membership is priced at 30,000 won ($27) for adults and allows unlimited entry for a year. Yearly members also get a 20 percent discount on educational programs offered by the arboretum as well as 10 percent off drinks at some of the coffee shops inside. They can also get 50 percent discounts to enter the National Baekdudaegan Arboretum in North Gyeongsang’s Bonghwa County, which was the largest arboretum in Asia when it opened in 2018.

Because of the pandemic that has kept travelers from overseas at bay, the center doesn’t offer any regular tours in languages other than Korean, but tours in other languages can be arranged if requested in advance. The arboretum also offers a tram service for those who have difficulties walking. A prior reservation is also required.

For now the arboretum has 24 different themes, but continues to add more. It is in the process of making a pollination area to teach youngsters about interactions between plants, flowers and insects.


Sejong National Arboretum is open from Tuesdays through Sundays. Until October, it opens from 9 a.m. to 6 p.m. The last admission is 5 p.m. It is 5,000 won for adults to enter, 4,000 won for teenagers and 3,000 won for children. To get there, you can take the train from the Seoul Station to either Osong Station or Daejeon Station and transfer to local buses. Alternatively, you can go to Seoul Express Bus Terminal to get onto an inter-city bus to go to Sejong Express Bus Terminal and get onto local bus No. 221. If you drive from Seoul, it takes about two hours and 30 minutes from central Seoul. For more information, go to www.sjna.or.kr or call (044) 251-0001.

Enjoy a breath of fresh air from a safe distance