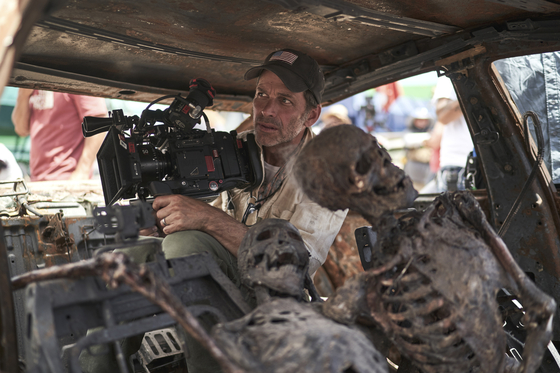 
After seeing success with his remake of the 1978 horror film “Dawn of the Dead" in 2004, director Zack Snyder hit a dead-end when it came to his upcoming zombie film “Army of the Dead.”

Snyder co-wrote the screenplay, directed and acted as cinematographer for the film.

“I was just talking with the guys from Netflix and I was just mentioning as a thing, the idea I had,” Snyder reminisces at an online press event last week. “And they were like, that sounds amazing, so go do that. (laughs) So I said there was a script but I would like to write it up from scratch — it wasn’t really written for me to direct and then if I’m the director I would like to write it myself and so I got Shay Hatten as a partner with me and we wrote the script, and then we just went right away and shot it. We wrote it pretty quick because I knew it pretty well [how it was going to go] and we went and shot and when we finished it, Netflix was like, ‘it’s great let’s go and do it.’”

In Snyder’s zombie apocalyptic world, a group of mercenaries plan to rob a Las Vegas casino but must first deal with a massive pack of zombies before they can claim their riches. The heist is led by Scott Ward, played by Dave Bautista, an ex-professional wrestler and most famously recognized as Drax the Destroyer in the Marvel series of “Guardians of the Galaxy.” But Scott and his group face a formidable contender as these “evolved” zombies can actually think and organize themselves as a pack — they’ve formed their own ranks, have their own Queen, and even have their own zombie tigers and horses to compete against the humans.

When Snyder first offered the role to Bautista, he was hesitant, but that all changed after he read through the script.

“I’ve been talking for years about trying to make a movie together and I asked him about this and he wasn’t really sure,” Snyder said.

“[He said] ‘I don’t really want to do another action thing’ but I told him to read the script. After reading it he called me and said he didn’t realize Scott had this huge emotional journey to go through. I said, ‘I’m going to take it for granted that you can kill a zombie, it’s the other thing that’s going to be a hard part [...] There’s vulnerability [in him], he plays this broken character that wants to be connected to his daughter. So that’s why I chose him.”

The father-daughter relationship between Scott and his estranged daughter Kate is another central theme of the film, which the filmmaker said evolved along with his own relationship with his children over the years.

“Those scenes between Kate and Scott, they're from my own experience,” Snyder said. “My own children play a huge part of those roles and just the catharsis that your children can hurt you with a word, worse than anybody but they can also bring you joy.”

Snyder explains why his zombies have evolved into different forms.

“They’re representative of an evolution because they’re not ambitious,” he explains. “They’re formidable, they have zombie tigers and horses but they’re clearly like you can’t beat them in a fight. They’re like kin of wolves or lions. [...] The zombie alphas are not really ambitious in a way that they kind of mind their own businesses. It’s only when [someone] pokes a fight that they act out.”

When asked if there were any takeaways in the film that were reflective of the real world, Snyder explains that the film is custom-made for all kinds of viewers looking for different purposes.

“If you want to watch the movie and just want to have fun for two hours, then by all means that’s what the movie should do for you,” he said. “If you want to take some deep dive and do a massive thesis about the zombie genre […] or if you want to be political [...] then it’s also a movie for you.”

“Army of the Dead” will be released on Netflix on May 21.

'All of Us Are Dead' cast interviewed by American broadcaster NBC