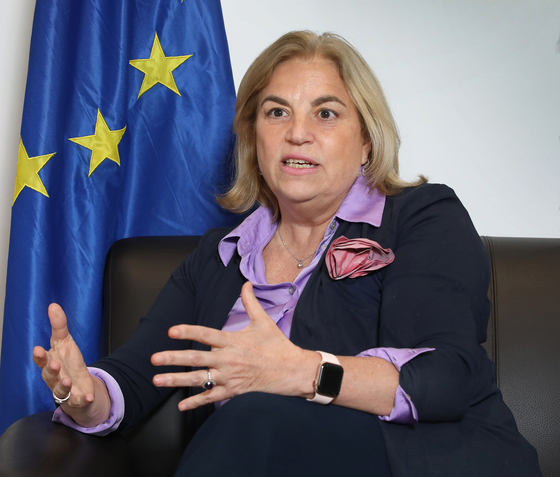 Maria Castillo-Fernandez, ambassador of the European Union (EU) to Korea, speaks with the Korea JoongAng Daily last week at the office of the EU delegation in Seoul. [PARK SANG-MOON]


One of the biggest changes that Maria Castillo-Fernandez, ambassador of the European Union to Korea, saw in Korea upon her return was how much greener the country had become in 12 years.

“Korea was certainly less green at the time, and the environment was not high on the political agenda,” Castillo-Fernandez recalled. “I remember, getting to work every day I had to cross the Banpo Bridge, and I had to decide whether to get on the higher or lower bridge depending on how bad the traffic was. Today, the lower bridge has the added function of a bike-lane. These kinds of changes are possible because there is an increase in demand from the people for greener options in transportation and environment.”

Castillo-Fernandez had represented the EU delegation in Korea as its deputy head of mission from 2005 to 2008. She returned to Seoul earlier this year as the head of the mission, after having served as the EU ambassador to Malaysia and head of division for India, Nepal, Bhutan and Bangladesh at the European External Action Service of the EU.

Her return to Korea coincides with the EU’s announcement of a policy strategy in the Indo-Pacific region, coming just two months after she presented her credentials to the Blue House.

Speaking from her direct experiences in Asia, Castillo-Fernandez emphasized that the announcement of the strategy signifies the EU's renewed commitment to the region.

“The EU strategy for cooperation in the Indo-Pacific is a renewed political commitment,” said Castillo-Fernandez. “It is our wish to enhance our cooperation with Asian partners and Indo-Pacific partners, to try to work together on global issues and on issues where we share common values.”

The EU and Korea this year are celebrating the 10th anniversary of their FTA, the first of which the union signed with an Asian country.

More recently, Korea and the EU have entered the final stages of their discussions on ensuring equal levels of data protection infrastructure to allow for a safe flow of data between the two, an issue that has become more imperative as the onset of the pandemic has moved many meetings to the online space.

Castillo-Fernandez sat down with the Korea JoongAng Daily last week before Europe Day, which is celebrated on May 9 every year, to discuss the beginnings of the union and how its founding spirit may be even more relevant as the EU and Korea look to cooperate in a pandemic-stricken world.

Several EU members had separate policy objectives towards the Indo-Pacific before. What does this latest announcement of a union-wide strategy mean for the Asian region?
The Covid-19 pandemic has shown that the global challenges that we are facing are even more challenging [than before] and that we need to secure partnerships and work more on multilateral platforms to resolve the pandemic. Asia is the center of economy, as 60 percent of the world’s trade passes through the waters of the region. For Europe, it is very important to secure the freedom of navigation, and oceans governance is one of the key areas of partnership outlined in the Indo-Pacific strategy of the EU. Additionally, we are seeing more events in the region that are undermining the universality of human rights, such as the events in Myanmar, Hong Kong and Xinjiang. We want to ensure development in protection of human rights in the region.
With Korea, we have a close cooperation on crisis management, which allows us to operate joint exercises and exchange naval officers, and cooperate on anti-piracy operations like the Atlanta Operation off the Somali coast. We expect to see expansions in these partnerships. Further details to the strategy will be announced in September.


The EU announcement of the Indo-Pacific strategy follows announcements of such strategies by other regional powers like the United States. How does the EU policy in the region coincide with, and perhaps differ from, the U.S. policy?
We have a new chapter in EU-U.S. relations to work together on global challenges. We are in close consultations with our counterparts in the United States, who are our close partners in the Indo-Pacific strategy. We will coordinate and consult with partners that do have these strategies, but our strategy is all-inclusive. It is not directed against any country. We need all the countries, including China, to be able to forge partnerships to fight global challenges like climate change and the pandemic. We will not be able to solve these issues without China. Whenever we find common values and common interest to work together, we will do it. 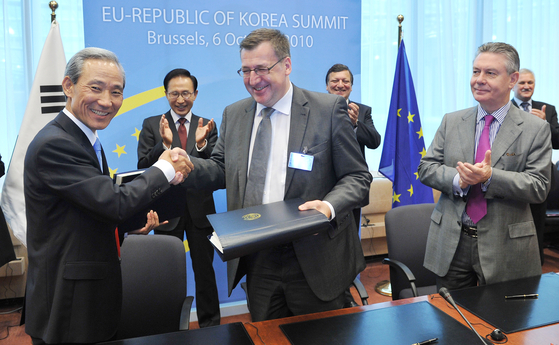 This year marks the 10th anniversary of the EU-Korea FTA. What’s your assessment of the agreement?
The FTA has been a win-win agreement on both sides. We have seen an increase of more than 46 percent in the bilateral trade, or more than 90 billion euros [$109 billion]. There are areas in which we can do more, such as trade on sustainable development sectors, environmental standards and labor rights. We will definitely see a growth in bilateral trade and investment on green technology, as everything in Europe now has to be green, from vehicles to business operations.
I see that some of the big companies in Korea are leading the energy transformation process, but some of the smaller and medium-sized companies will need assistance from the government to follow. But I know Korea can do it — what the Koreans set their minds to, they can make it happen in a bbali bbali [Korean phrase used to express speediness or impatience] fashion.


The EU has been urging Korea for years to follow up on its pledge to meet the standards of the International Labor Organization in its labor practices, as per the agreement in the EU-Korea FTA. The National Assembly of Korea ratified three of the four major conventions of concern in February. What are the next steps, from the EU's perspective?
We are very happy that the Assembly has ratified the conventions. There is still some work to be done, as a convention on forced labor is still pending to be ratified. For its ratification, the Korean government is looking at amending several of its laws.
Korea is a key strategic partner of the EU in many aspects, including trade, and labor is also part of trade. Businesses need to take care of the rights of the workers. This is also a fundamental value that I imagine Korea shares as well. It is important that these fundamental international principles that are part of the UN framework is adhered to in our partnership and we are willing to show examples of how we have been doing it in Europe. 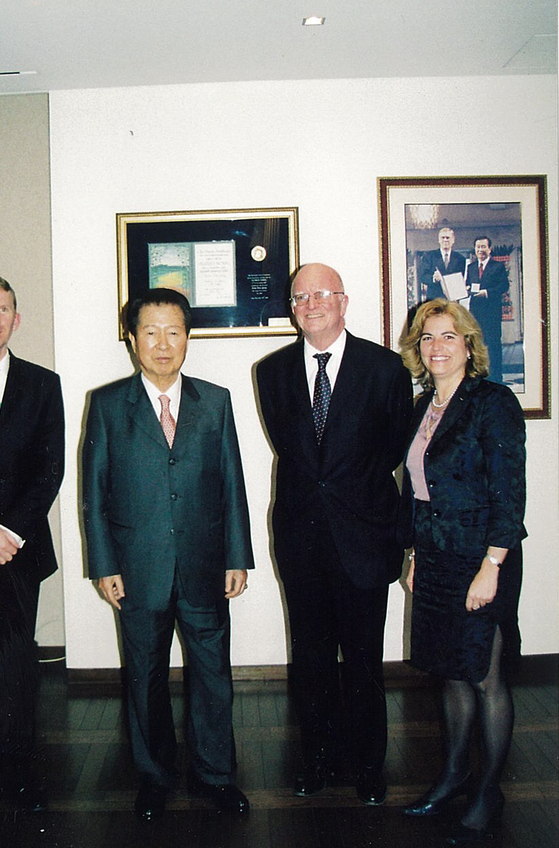 In 2007, EU Ambassador to Korea Maria Castillo-Fernandez, then the deputy head of the EU Delegation to the Republic of Korea, stands with the former EU Ambassador Bria McDonald and the late President Kim Dae-jung. [EU DELEGATION IN SEOUL] 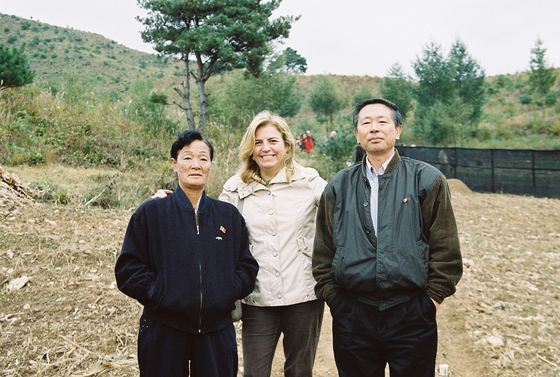 In 2002, as a delegation of the European Union, Ambassador Castillo-Fernandez visited North Korea for the EU’s food security project for rural communities. [EU DELEGATION IN SEOUL]

You have experiences in participating in the inter-Korea dialogues for denuclearization of North Korea during the Kim Dae-jung administration. Based on your experiences then, do you think multilateralism is still the effective tool for denuclearization of North Korea?
I was responsible for the European Commission’s overall relations with the Korean Peninsula, including both the Republic of Korea and DPRK [Democratic People’s Republic of Korea], from 2000 to 2005. I had several trips to Pyongyang at the time. I particularly remember crossing the DMZ in 2003, as it was a good moment in the inter-Korean relations and it was the only time that a European delegation was allowed to cross.
The experience allowed me to understand the two Koreas and their people. It helped me understand how important the inter-Korean link is in dealing with the tensions of the Korean Peninsula. Whatever solution you can find, it has to come from the heart of the Korean people, north and south of the border.
I also believe a multilateral setting, with the two Koreas at the center, would be the best for discussions on a solution on the North, as the issue of nonproliferation and denuclearization does not affect just the two Koreas but the greater international community. Easing of tensions in this part of the region will be important for the rest of the world. 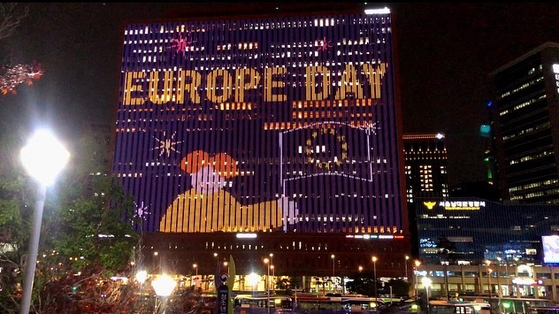 The building of the EU delegation in Seoul is lit up to celebrate the Europe Day on Sunday. [EU DELEGATION IN SEOUL]

How will Europe Day be celebrated this year?
May 9 is always a day of celebration for us, and it’s especially a day to raise awareness of what Europe is about. The EU is a peace project, a project of reconciliation, that has given 71 years of peace, stability, security and prosperity to Europeans. It was born when the once-warring nations of the continent were able to agree to pool key resources and to place them into the hands of a supranational authority. This is a unique experiment that we haven’t seen anywhere else in the world.
We have been celebrating the day this year with virtual concerts by the philharmonic orchestras of Vienna and Seoul and a film festival in Seoul where many European films will be shown, both in person and online.


The world is in a very different situation now compared to when the EU was born. How do you think the EU’s objectives can be applied to a pandemic-stricken world, especially to the current situation of unequal distribution of vaccines across nations?
Inside the EU is a principle of solidarity and equality, so all the countries will get a share of the vaccines determined by the size of their population. Outside of the EU, we have been the biggest exporter of vaccines, exporting 150 million doses to our partners around the world — which is more than 30 percent of what we produce. We have also been the biggest donor in the Covax [vaccine-sharing scheme of World Health Organization]. The EU has been exporting vaccines even at times when the supply of vaccine at home was not enough to cover the whole population. We will not be safe from the pandemic until all of us are vaccinated.