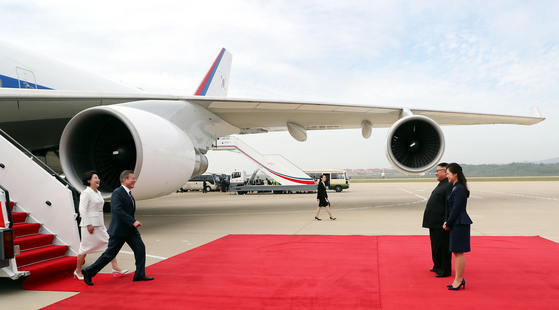 President Moon Jae-in and first lady Kim Jung-sook, left, are greeted by North Korean leader Kim Jong-un and his wife Ri Sol-ju at the Pyongyang Sunan International Airport in the North Korean capital on Sept. 18, 2018, ahead of their summit. [JOINT PRESS CORPS]


The Incheon Metropolitan Government reviewed plans to invest some 4.4 trillion won ($3.9 billion) to make Incheon International Airport a hub for exchanges with North Korea and build and repair its airports, according to a study commissioned by the city revealed Sunday.

In May 2020, Incheon Metropolitan City commissioned Korea National University of Transportation's industrial-academic cooperation group for 135 million won to research plans to make Incheon International Airport a base airport to enable foreigner to visit North Korea and allow for North Korean tourism and imports and exports.

The JoongAng Ilbo disclosed the details of the study for the first time Sunday, though the results were released on April 11.

Rep. Han Ki-ho, a three-term lawmaker of the main opposition People Power Party (PPP), shared details of the copy of the report he received from the Incheon city government on its study into Incheon International Airport as a “base” for exchanges with North Korea. The study described that “aviation will cost less and takes less time than modernizing railways,” and also proposed ways to improve North Korea’s airports.

Such plans were to prepare the aviation industry for inter-Korean exchanges in accordance to the Sept. 19, 2018, joint declaration between President Moon Jae-in and North Korean leader Kim Jong-un during their third summit in Pyongyang.

This comes as ruling Democratic Party (DP) lawmakers proposed on April 26 revisions to a bill that would allow Incheon International Airport Corporation and Korea Airports Corporation to support such inter-Korean aviation projects.

The Incheon city government report included plans to renovate or newly construct nine North Korean airports. North Korea has eight flagship airports out of more than 50 airports located across the country, and the study noted that a new airport was needed in the North Korean city of Rason, which borders Russia.

It found that “once exchanges are underway and economic growth comes in full swing, a second round of general airport construction and infrastructure repair can be proposed.” 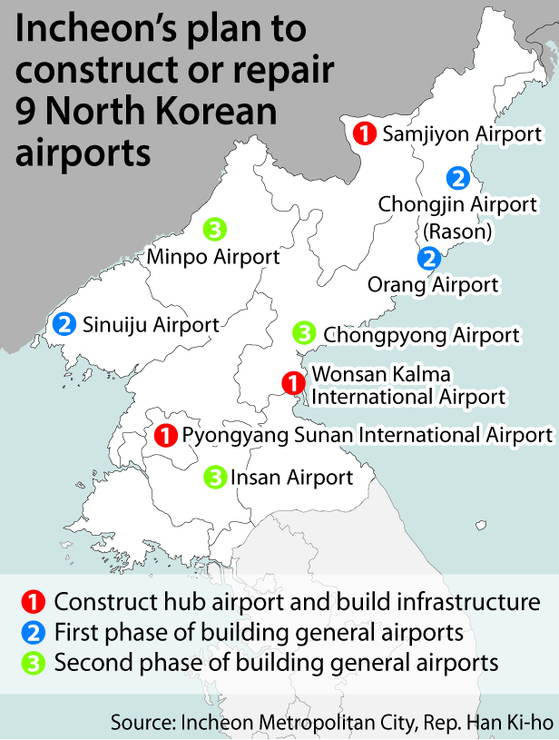 The report estimated the budget required for the project to approximate 4.4 trillion won and proposed obtaining the funds through public-private partnership.

It also included a proposal to allocate 1.8 trillion won in state funds for the construction of a South-North peace road connecting the South's Yeongjong Island and Ganghwa with Kaeseong and Haeju in North Korea’s South Hwanghae Province.

Another 30 billion won was proposed to establish a North Korea business platform, opening an office of the Federation of National Economic Cooperation based in Dandong, China, on Yeongjong Island, off the west coast of Incheon, where the Incheon airport is located.

The report also proposed an 18-billion-won project building a North Korea airport terminal connecting Yeongjong Island with Haeju, located less than 50 kilometers (31 miles) away from Incheon, and other North Korean cities like Kaesong near the inter-Korean border.

However, there has been political controversy over the results of the study commissioned by the Incheon city government as the DP recently sought to establish a legal basis to support such airport projects. Incheon Mayor Park Nam-chun and 33 out of 37 Incheon Metropolitan Council members are in the ruling party.

On April 26, a group of some 10 DP lawmakers including Rep. Park Sang-hyuk of the National Assembly’s Land, Infrastructure and Transport Committee proposed including projects for the “exchange and cooperation of the aviation industries of the two Koreas" in the tasks for the Incheon International Airport Corporation and Korea Airports Corporation.

Park and the lawmakers said the reason behind the bill was to “open inter-Korean air routes and improve North Korea's underdeveloped airport facilities to enable smoother transportation for personnel exchanges and resources.”

However, some experts question the practicality and timing of pushing for such a bill.

Shin Beom-chul, director at the Center for Diplomacy and National Security at the Research Institute for Economy and Society, said, “It will be difficult to realize inter-Korean joint projects such as airport construction because they violate UN Security Council sanctions on North Korea. It won’t be too late to begin them once North Korea steps toward denuclearization and opens up, so I wonder if it’s necessary to propose an amendment bill at this point.”

PPP Rep. Han said, “The reality is that the government has not been able to carry out long-term plans to improve transportation in underdeveloped regions domestically because of a lack of finances, but the idea here is that we are building airports for North Korea with our taxpayers’ money in a situation where Pyongyang could fire missiles.”

He added, “It especially doesn’t make sense for us to support airport facilities that are highly likely to be used for the military.”