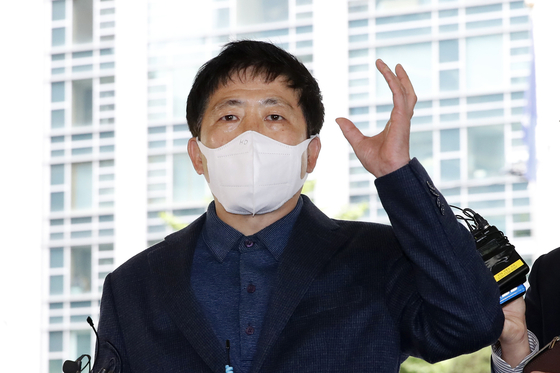 
Police on Monday summoned Park Sang-hak, a North Korean defector who claims his organization dispatched anti-Pyongyang propaganda leaflets from near the demilitarized zone into the North, for questioning as a suspect in his alleged defiance of the leaflet ban.

As Park arrived at the Seoul Metropolitan Police Agency at 2 p.m., he told reporters his motive for refusing to abide by the law forbidding the sending of leaflets to the North.

"I heard South Korea was an American colony and a living hell before we crossed the Yalu and Tumen rivers, but we are trying to tell the truth through leaflets," Park said.

"Is it so wrong to inform the North Korean people of politics, culture, society, liberal democracy and the Universal Declaration of Human Rights?" he asked.

While he did not mention the ban on dispatching balloons with leaflets over the inter-Korean border, President Moon Jae-in the same day mentioned his administration's disapproval of such activities during a speech marking the fourth anniversary of his inauguration.

"I hope that the [South Korean] people will join hands to create an atmosphere for dialogue," Moon said. "In particular, it is never desirable to dampen inter-Korean relations by violating inter-Korean agreements and current laws.

"I stress that the government has no choice but to strictly enforce the laws."

Responding to Moon's comments, Park insisted, "It is North Korea that must change," mentioning the North's demolition of the Inter-Korean Liaison Office with explosives in June last year and the shooting and burning of a South Korean fisheries official who crossed the maritime border in the Yellow Sea last September.

Park, head of Fighters for a Free North Korea, an organization of North Korean defectors critical of the North Korean regime, said the organization sent 10 large balloons carrying around 500,000 leaflets and $5,000 in U.S. dollar bills between April 25 and 29.

The organization's offices were raided by police Thursday following Park's claims, which, if confirmed, would be the first case of leaflets being sent over the border since a ban prohibiting such activities came into effect in March.

An amendment to the Development of the Inter-Korean Relations Act, which the ruling Democratic Party passed in the National Assembly in December over a boycott by the opposition People Power Party, imposes a fine of up to 30 million won ($27,000) and a jail term of up to three years for sending leaflets, USB sticks, Bible excerpts and money across the 38th parallel into North Korea via balloons.

Despite facing possible criminal prosecution, Park struck a defiant posture to the law.

"Even if I go to prison, my comrades will continue to fly leaflets to North Korea," he said.