The magic of a diplomatic pouch

The magic of a diplomatic pouch 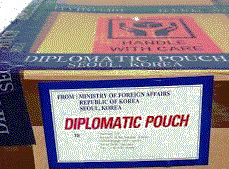 
A diplomatic pouch became an untouchable privilege 60 years ago. It was stipulated in the Vienna Convention on Diplomatic Relations in 1961. For example, diplomatic pouches are exempt from customs clearance and X-ray screening. They are literally a free pass.

Diplomatic pouches look different from other cargo, as they are clearly labeled in English. There is no size restriction, and they vary in size from an envelope to a large suitcase. In Korea, the smallest is 70 centimeters (28 inches) by 80 centimeters, and although rare, they can be as large as 2 meters (79 inches) by 2 meters. They are mostly used to transport documents and supplies for diplomats between headquarters and overseas missions. They are transported by civilian passenger planes or regular transport planes.

Gold bars are not the worst. There have been cases of smuggling hand grenades and letter bombs. A diplomatic pouch has also been used for kidnap. When former Nigerian Transportation Minister Umaru Dikko sought refuge at Stansted Airport in London, he was found in a diplomatic pouch as part of the government’s attempt to kidnap and send him back to Nigeria.

If used properly, diplomatic pouches are very useful. NASA used a diplomatic pouch to fix the bathroom at the International Space Station in 2008. After the pump in the toilet installed by Russia stopped working, three astronauts fixed it. But it could not process urine properly. Therefore, NASA brought in a 0.5-meter replacement pump from Russia before the liftoff of space shuttle Discovery. In order to meet the tight schedule, various parts and tools were transported in a diplomatic pouch on a special flight.

It is controversial that the wife of Park Jun-young, Minister of Oceans and Fisheries nominee, allegedly smuggled expensive porcelain from Britain after her husband finished his job at the embassy in London. The opposition People Power Party criticized that it was a case of abusing the diplomatic pouch. But Park claimed that the diplomatic pouch was not used. The Oceans Ministry stated that any profit-making activity from goods transported in a diplomatic pouch are subject to penalties. Diplomatic pouches are not guilty.