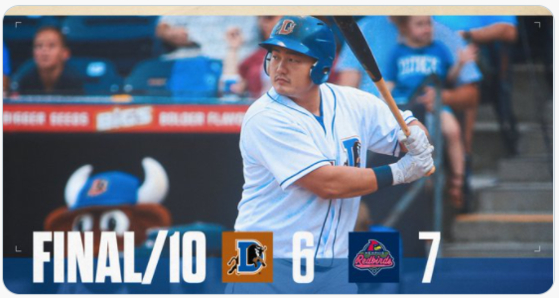 An image tweeted by the Durham Bulls shows Choi Ji-man at bat in the 7-6 extra inning loss against the Memphis Redbirds on Sunday. [SCREEN CAPTURE]


Choi Ji-man of the Tampa Bay Rays recorded three hits for the Triple-A Durham Bulls on Sunday, a good sign as he continues to rehabilitate following surgery in March.

Choi also picked up an RBI in the 7-6 extra-inning loss to the Memphis Redbirds at AutoZone Park in Memphis.

Choi underwent arthroscopic surgery on his right knee in March, missing part of spring training and the start of the 2021 season.

Choi struggled with knee pain from the beginning of spring training, ultimately sitting out 10 days in mid-March. After a brief stint back with the team at the end of March, Choi was taken out of commission and underwent surgery.

Choi started to pick up at-bats in late April, before joining the Bulls late last week. Choi could rejoin the Rays at some point in the next few days as the Florida club returns home, starting with a game against the New York Yankees starting May 11.