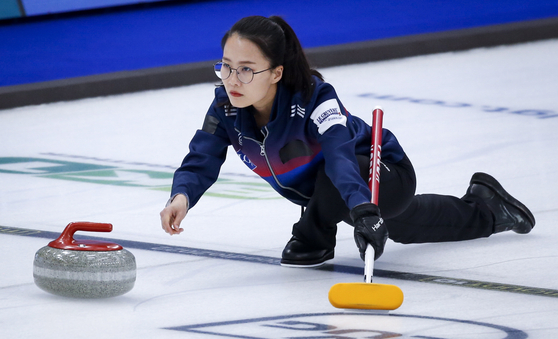 Korea skip Kim Eun-jung makes a shot against the Czech Republic at the 2021 Women's Curling World Championships in Calgary, Canada on Friday. [AP/YONHAP]

Despite entering the tournament as the second-highest ranked team, Korea got off to an inauspicious start at the Women's World Curling Championship, dropping their first four matches against Switzerland, Russia, the United States and Germany.

Team Kim then attempted a herculean comeback, winning their last four games in a row against Japan, China, Sweden and the Czech Republic.

Korea took their seventh win at their last round robin game on Friday against the Czech Republic. Opening the scoring in the second end with two points, Korea took the score to 6-2 in the seventh end and finished 7-4.

With seven wins and six losses, Team Kim tied for fifth place with Canada and the United States in the table, but with six Olympic berths on offer, a tied table wasn't an option.

The rules of the World Curling Federation state that when three or more teams are tied, the record of the games between the tied teams shall provide the ranking.

That meant that it came down to head-to-head records. Korea had lost 11-5 to the United States on May 1 and 8-4 to Canada on May 3, which put them in seventh place and out of contention.

Team Kim is now looking at a longer path to the Beijing Games. They will have to win first at the Korean National Team Qualifications starting June 22, then go on to compete for the three remaining Olympic berths at the next Olympic qualifying tournament in December.

During the PyeongChang 2018 Winter Olympics, Team Kim went down in history not only for winning a silver medal in a sport that was practically unheard of in Korea, but also for doing it in style. Whether Team Kim will be able to relive their former glory at the next winter Olympics is yet to be seen.