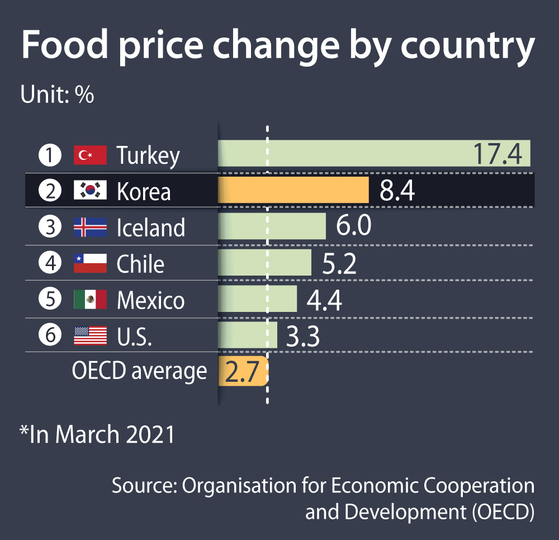 In March, Korea’s food consumer prices rose at the second-fastest pace among member countries of the Organisation for Economic Cooperation and Development (OECD).

According to data from the OECD, Korea's food consumer price index in March was up 8.4 percent on year, the second steepest rise among its 35 member nations. Turkey ranked first at 17.4 percent.

Turkey topped the list, surging 17.4 percent on year. Inflation has been weighing on the Turkish economy, the abrupt dismissal of central bank chief Naci Agbal after just four months in office adding fuel to the inflation fire as the lira plunged.

In April, Korea’s food consumer price index increased by 8.1 percent on year. Accurate comparison is difficult as only seven out of 35 OECD member countries reported their April indexes as of Tuesday, but Korea is expected to continue to remain high in the list.

Despite the seemingly serious situation, the government blamed the base effect.

“Food prices may temporarily be subject to a wider increases due to base effects of the pandemic,” said Finance Minister Hong Nam-ki.

In 2011, the food consumer price index grew 8.1 percent, but government’s approach then was different. Government meetings on inflation were held every week, with the president even sitting in. Although criticized as anti-market, the real-name price management system was implemented. The system named specific public officials to oversee price increases of goods.

“It seems that the [the government] is not actively responding to food price increase because prices can be heavily influenced by temporary factors such as weather,” said Kim So-young, a professor at Seoul National University’s Department of Economics. “As the economy recovers, we need to be cautious because inflation may spread to additional sectors other than the food market.”